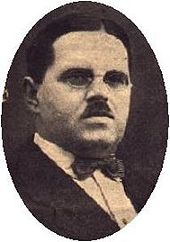 He was born in Saint Petersburg at the end of 1891, or beginning of 1892 and died in the same city (then called Leningrad) on 18 April 1942. He was christened Karl Artur Leonid, but amended his forenames to Leonid Ivanovich subsequent to the 1917 October Revolution.

He composed more than 1500 endgame studies and problems, many of which were awarded first prize for their great beauty and original conception. He is generally considered one of the greatest of all endgame composers. He was a chemical engineer by profession.

Leonid's brothers, Arvid and Evgeny, were also chess players. Arvid Kubbel was a strong over the board master, having played in the first four USSR chess championships, while Evgeny was himself an endgame composer. Both Leonid and Evgeny Kubbel died of starvation in 1942 during the Nazi siege of Leningrad, while Arvid was executed by the NKVD in 1938.

A study by Leonid Kubbel

This is one of Leonid Kubbel's many masterpieces. The Black a-pawn apparently cannot be stopped from promotion, after which the game would be lost for White; however, a subtle plan avoids defeat and checkmates the black king. Video analysis of this study can be found here on YouTube.