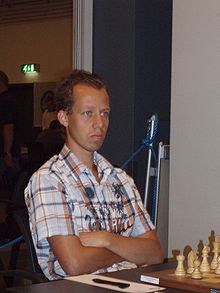 Kjetil A. Lie at the Norwegian Chess Championship at Hamar

Kjetil Aleksander Lie (born November 18, 1980 in Porsgrunn) is a Norwegian chess player, and Norway's eighth International Grandmaster (GM). Lie was the Norwegian chess champion in 2009 and 2010. Representing the chess club in Porsgrunn, Lie is the first Norwegian GM not from the Oslo vicinity.

In 2002, Lie was awarded the title of International Master. The required three Grandmaster norms came in the Norwegian team chess championship of 2003 to 2004, Politiken Cup in Copenhagen in 2004, and Smartfish Chess Masters in Drammen in December 2004 and January 2005. Even after these norms, Lie had still not achieved the required Elo rating of 2500 until he won the first two rounds in a local tournament in Porsgrunn at the end of February 2005. These wins gave Lie a rating of 2500.5, and it did not matter that Lie immediately proceeded to lose the third game.

During the 2007 candidates matches in Elista, Lie served as Magnus Carlsen's second, helping with analysis and preparations. He was praised by Magnus's father for his efforts and humor.

Lie has played on the Norwegian team at the Chess Olympiads between 2000 and 2010. In the 2008 Olympiad in Dresden, Lie's third round win over Bu Xiangzhi secured Norway an upset win over China.

Lie secured his first Norwegian chess championship in Bergen 2009 with 6.5/9 points, despite an upset loss to Lasse Løvik in the first round. In the 2010 championship, Lie was one of four players to share first place with 6.0/9, the three others being his brother Espen Lie, Joachim Thomassen, and Frode O. O. Urkedal. Later that year, he won the double round-robin play-offs October 14-17 in Stavanger with 4/6.

Lie's playing style is aggressive and sacrificial, and he is known as a dangerous tactician. With White, Lie has varied between 1.c4 and 1.e4, with Black he prefers sharp defenses such as the Sicilian Defence and Benoni Defense.