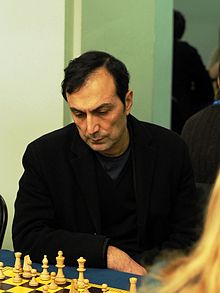 He was known for playing strange and unorthodox openings. Shirazi's rating rose rapidly and he became one of the highest rated players in the United States Chess Federation. However, when invited to play in the 1984 U.S. Chess Championship, Shirazi managed only one draw from 17 games, finishing last. In that championship, Shirazi also achieved the dubious distinction of losing the shortest decisive game in the history of the U.S. Championship: his game as White against John Peters, which went 1.e4 c5 2.b4 cxb4 3.a3 d5 4.exd5 Qxd5 5.axb4?? Qe5+ 0-1.

He subsequently made an appearance in the movie Searching for Bobby Fischer. He is introduced as "Grandmaster Shirazi" but his actual title is International Master, awarded in 1978.

As of 2006, Shirazi had been living in France for several years. He is still an active tournament player and also gives lessons. He changed his FIDE federation from the USA to France in 2006.

In this game, Kamran Shirazi boldly plays an extremely sharp line regarded as dubious for Black (White has won many brilliancies in this line), and beats a computer with it: