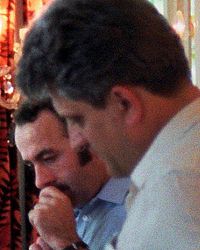 János Flesch (30 September 1933 - 9 December 1983) was a chess Grandmaster, chess writer and coach, born in Budapest, Hungary. He is best known for claiming a world record simultaneous blindfold exhibition when he played 52 opponents in Budapest in 1960. However, he was apparently allowed to consult scoresheets of the games and therefore his claim was disallowed.

Flesch was awarded the International Master (IM) title in 1963 and the Honorary Grandmaster (GM) title in 1980. He died in an automobile accident with his wife Ildiko Tenyei in Whitstable, England, in 1983.

János Flesch was an attacking player, taking risk in his games, developing an imaginative style of play. He often sacrificed material in search for the initiative in chess. In many of his sharp games he won with a creative attack against the opponent's king.