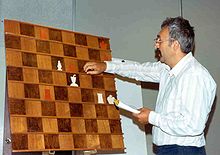 He was editor of the study section of Szachy (Chess) from 1971 to the magazine's closure in 1990. Rusinek became an International Judge of chess composition in 1983, and a Grandmaster of chess composition in 1992. He won over 30 first prizes in composing tourneys. The Oxford Companion to Chess opines that "his achievements are likely to rival those of his greatest predecessors".

White's being required to make all three underpromotions in order to draw is exceptionally unusual. In Endgame Magic (Batsford, 1996), John Beasley and Timothy Whitworth comment that it "represents a very much greater feat of composition than might at first appear. That it was accomplished with the use of only nine men adds still more to the composer's achievement." Beasley and Whitworth also comment that "It is quite easy to construct a position in which White must promote to a rook or bishop in order to avoid giving stalemate," but "It is much more difficult to create a position in which White must underpromote to create a stalemate," which is done on two occasions in this study.

Rusinek subsequently (64, July 27, 1978) added an introduction to this study which added a promotion to queen to the already existing underpromotions, thus creating an Allumwandlung. This later version is shown to the right. 1.h8R+ is insufficient, since 1...Ke7 will mate quickly. 1.h8Q+ is therefore necessary, and after the forced continuation 1...Qxh8 2.g7+ Qxg7 3.hxg7+ Ke7, the initial position of the original study is reached. Rusinek himself considered this version inferior to the original (aesthetics versus task).