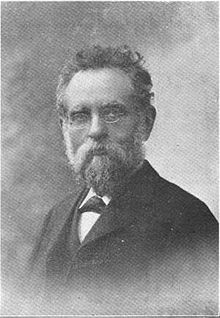 Isaac Leopold Rice (February 22, 1850 - November 2, 1915) was a German American businessman, musicologist, and chess patron and writer. In 1899 he founded the Electric Boat Company, which produced submarines for the U.S. and British navies and continues today as General Dynamics Electric Boat.

Rice was born in Wachenheim, Bavaria, in 1850; his mother emigrated to the United States when he was nearly six years of age. He was educated at the Central High School in Philadelphia and later, at nineteen he was sent to Paris where he studied music for three years. While in Paris he sent stories to the Philadelphia newspapers for printing. On his return to America, he moved to New York City and practiced music before going back to school to become a lawyer. After graduating from Columbia College of Law in 1880 he practiced law for the rest of the decade.

In the practice of law he became more aware of and involved in the transportation business, mainly in the expanding railroad empires and their multiplying legal imbroglios. He was invited to start a publishing company by some associates in the music printing societies. In the 1890s he was looking to move and diversify and possibly invest early in emerging companies with a potential for growth. In 1892 he bailed out the bankrupt Electro-Dynamic Company in partnership with William Woodnut Griscom. He became the first president of The Forum magazine, and later the Electric Storage Battery Co. (later Exide) in 1897.

Some of the numerous other companies Rice organized or was involved in included the Electric Vehicle Company, Car Lighting and Power Company, American Casein Company, and the Consolidated Rubber Tire Company.

As president of Electric Storage, he became aware of the attempts (despite financial difficulties) since 1896 to deliver the first modern submarines for the US Navy, which ran on electric power while underwater. A year after the 1897 launch of their first vessel, the Holland VI, the management of John Philip Holland and Lewis Nixon found it difficult to finish making the last details operable and were running out of cash. Isaac Rice moved in, taking over and renaming the company as the Electric Boat Company on 7 February 1899. After a few months of negotiations and multiple tests, the United States Navy purchased Holland VI, renamed it USS Holland, and awarded the new company a contract to build its first fleet of Plunger class submarines. Also in 1899, Rice added the Electric Launch Company (Elco) to his family of companies.

During World War I, Rice's new company (Electric Boat) and its subsidiaries (notably Elco) built 85 Navy submarines and 722 submarine chasers, along with 580 motor launches for the British Royal Navy. Electric Boat was a founding company of General Dynamics Corporation, which is the company's Cold War progeny.

In 1902 he received from Bates College the honorary degree of LL.D.

The books published by Rice include: "What Is Music?" (New York, 1875), which was supplemented by "How the Geometrical Lines Have Their Counterparts in Music" (ib. 1880). The latter work was subsequently made part of the "Humboldt Library of Science." He also contributed a large number of articles to the "Century," The Forum, and "North American Review" publications.

Rice married Julia Hyneman Barnett (1860-1929) on December 12, 1885. His "intellectual partner" and an "accomplished musician", Julia B. Rice campaigned successfully against the horns and whistles of ships and founded the Society for Suppression of Unnecessary Noise (1907). They had six children: Muriel "Polly" (1888-1926), Dorothy "Dolly" (1889-1960), Isaac Leopold Jr., Marion "Molly" (1891-1990), Marjorie "Lolly" (1893-1980) and Julian. Dorothy Rice (Peirce, Sims) and Marion Rice Hart both became famous sportswomen - aviators, among other things - and writers. Isaac and Julia, Muriel and Dorothy are buried in a family plot at Woodlawn Cemetery in Ocala, Florida.

Rice died at the Hotel Ansonia in New York City on 2 November 1915.

Rice was a prominent figure in the American chess world. He became president of the Manhattan Chess Club, and presented for competition several trophies, including the one that was competed for annually by cable by the universities of Oxford and Cambridge, representing England, and those of Harvard, Yale, Princeton, and Columbia, representing the United States.

In 1895 he discovered a variation of the Kieseritzky gambit, which then became known as the Rice Gambit and sponsored tournaments where the opening became the starting point of each game. Emanuel Lasker and Mikhail Chigorin were two of many players who contested these tournaments, with bonus prizes for white wins. In 1904 he formed the Rice Gambit Association which published a detailed analysis of the effects of the move.