Madl learned to play chess from her father. In 1978 she became a pupil of the chess school Mereszjev that helped to promote talented Hungarian children and teenagers.

In 1986 she could repeat her success at the European Junior Championship which in this year took place in Băile Herculane. In the same year she became World Junior Chess Championship U20 in Vilnius, 2 points ahead of Camilla Baginskaite and Svetlana Prudnikova. In May 1998 she was third at the Elo-tournament in Bechhofen, in January 1999 third at the ninth International Open in Augsburg-Göggingen. In January 2001 she won the International Brauhaus-Riegele-Tournament in Augsburg. In March of the same year she won without losing a single game the Tel Aviv Chess Festival, the first international women's tournament that ever took place in Israel. In January 2002 she won the 13th International Augsburg IM-Tournament.She won Hungarian Chess Championship in 1990, 1991, 1993 and 1999. 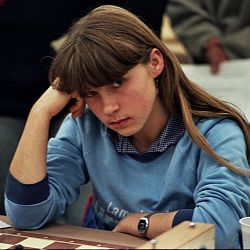 Mádl at the Thessaloniki Olympiad 1984

With the Hungarian national women's team she took part in 11 Women's Chess Olympiads between 1984 and 2006 with an overall result of 49 wins, 49 draws and 19 losses. The only Chess Olympiad in this time that she did not attend was the 2002 Olympiad in Bled. She won the Olympiad with her team twice: in 1988 and in 1990. The Hungarians winning the Olympiad 1988 in Thessaloniki was remarkable. For the first time since 1976 the event was not won by the Soviet Union. Mádl played together with the three Polgár sisters (Judit, Zsuzsanna and Zsófia). The gold medal was overshadowed by the tragic loss of her boyfriend of that time, Béla Perényi. A few weeks before on the way from Budapest to the Olympiad he was killed in a car crash. During the Olympiad Mádl's coach was the FIDE Master Ottó Magyar

Being a member of the German team USV Halle, she plays for the federal state team of Saxony-Anhalt, with which she won the Championship of the Federal States (Ländermeisterschaft) in 2004.