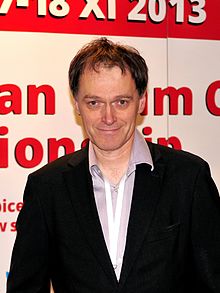 Helgi Ólafsson (born 15 August 1956) is an Icelandic chess grandmaster who won the Icelandic Chess Championship six times and, as of 2009, holds an Elo rating of 2522.

A native of Heimaey, the largest and sole populated island in the Vestmannaeyjar [Westmen Isles] archipelago off the south coast of Iceland, Helgi was sixteen when the Bobby Fischer-Boris Spassky World Chess Championship 1972, dubbed the chess world's "Match of the Century", was held in Reykjavík. He subsequently became one of a group of Icelandic chess prodigies who emerged in its aftermath, achieving, himself, the title of grandmaster in 1985.