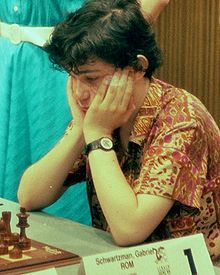 Schwartzman is originally from Bucharest, Romania and moved to Florida, USA. He played in his first chess tournament at the age of 4, obtained the FIDE Master title when he was 12 years old, and just 3 years later became an International Master. In November 1993, the FIDE Congress in Curitiba, Brazil awarded him the International Grandmaster title, making him one of the youngest Grandmasters in the world at that time at the age of 17.

In 1988 he took 2nd, behind Judit Polgár, in the World Under 12 Championship. Schwartzman won the 1996 U.S. Open at the age of 19 (youngest since Bobby Fischer) and was the winner of the Internet World Student Championship. He started the world's first interactive chess school in 1996, the Internet Chess Academy.

Schwartzman left the chess world in 2000. He went on to become CEO at a software company.