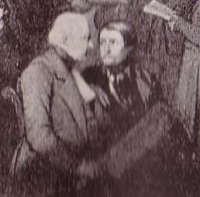 Detail of the lithography Le Match Staunton - Saint-Amant by Alexandre Laemlein. Rousseau is on the right.

Eugène Rousseau (c. 1810 in St. Denis, France - 1870) was a French chess master. He was the strongest chess player in New Orleans in the first half of the 1840s. The Rousseau Gambit is named after him.

In 1845 Rousseau played a match against the Englishman Charles Stanley for the title of chess champion of the US, the first contest ever for that title. The match was played for a stake of $1000. Rousseau lost the match (+8 −15 =8) and Stanley became the first US Champion.

Rousseau's second in the match was Ernest Morphy, who took his eight-year-old nephew Paul Morphy along and allowed him to be present for the contests. Later, Paul was allowed to play Rousseau, and it became clear that Paul was the better player, despite his young age.

Rousseau beat Winawer with black pieces in Paris in 1867: