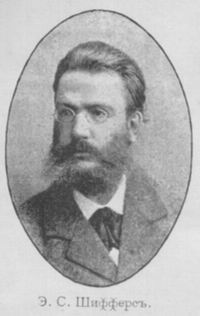 Schiffers parents emigrated from Germany. He was born in Saint Petersburg and also died there.

Schiffers held the title of Russian champion for 10 years before finally being defeated by his student, Mikhail Chigorin, in 1880. At their first meeting in 1873, Schiffers was able to offer Chigorin (who also from St. Petersburg) knight odds. In 1878 they played on even terms, Schiffers losing the first of two matches 7-3, but winning the second 7.5-6.5, thus establishing himself as the second strongest player in Russia after Chigorin himself. They later played two more matches with Chigorin winning both.

At Rostov on Don in 1896 he played a match against former World Chess Champion Wilhelm Steinitz, losing 6.5-4.5.

Schiffers played eight major foreign tournaments from Frankfurt 1887 to Cologne 1898. His best tournament result was at Hastings 1895 where he finished sixth with 12/21 (Harry Pillsbury won). In 1899 and 1900/01, he took second places, behind Chigorin, in All Russian Masters Tournament (1st and 2nd RUS-ch).

Schiffers was known as "Russia's Chess Teacher". In 1889, Schiffers gave the first public lectures on chess theory in Russia, at the St Petersburg Chess Association and in other cities. He wrote the chess textbook Samouchitel shakhmatnoi igry (Chess Self Taught, published 1906).