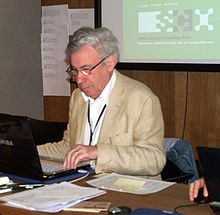 David Neil Laurence Levy (born 14 March 1945, in London), is a British International Master of chess, a businessman noted for his involvement with computer chess and artificial intelligence, and the founder of the Computer Olympiads and the Mind Sports Olympiads. He has written more than 40 books on chess and computers.

Levy was born in London and went to Queen Elizabeth's School, Barnet. He won the London Junior Chess Championship in 1965 and 1966. He won the Scottish Chess Championship in 1968. He tied for fifth place at the 1969 Praia da Rocha Zonal tournament, scoring over two-thirds and thereby obtaining the title of International Master. He played on Board One for the Scottish team at the 1972 Chess Olympiad in Skopje, Yugoslavia, scoring six wins, five draws, and seven losses (47.2%).

Levy became a professional chess writer in 1971, and has been prolific. Several of his books were co-written with English Grandmaster and prolific chess author Raymond Keene. Levy also married Keene's sister. He has functioned as literary agent for the escaped Great Train robber, Ronald Biggs.

In the late 1970s, Levy consulted with Texas Instruments on the development of the Chess module for the TI-99/4A Home Computer Project.

In 1997, he led the team that won the Loebner Prize for the program called "CONVERSE". The prize competition rewards the program that is best able to simulate human communication. Levy entered the contest again in 2009, and won.

Since 1999, he has been the president of the International Computer Games Association. He was Chairman of the Rules and Arbitration Committee for the Kasparov vs Deep Junior chess match in New York City in 2003.

Levy once started a business called Tiger Computer Security with a famous computer hacker, Mathew Bevan. Now he is the chief executive officer of Intelligent Toys Ltd, a London-based company that develops toys that incorporate AI.

Levy also wrote Love and Sex with Robots, published in the United States in 2007 by HarperCollins, and forthcoming from Duckworth in the UK. It is the commercial edition of his PhD thesis, which he defended successfully on 11 October 2007, at Maastricht University, Netherlands. On 17 January 2008, he appeared on the late night television show The Colbert Report to promote his book. In September 2009, Levy predicted that sex robots would hit the market within a couple of years.

In 1968, after hearing artificial intelligence (AI) researchers John McCarthy and Donald Michie predict that a computer would defeat the world chess champion within ten years, Levy made a famous bet with four AI experts, ultimately totalling £1,250, that no computer program would win a chess match against him within ten years. In 1973, he wrote:

Clearly, I shall win my ... bet in 1978, and I would still win if the period were to be extended for another ten years. Prompted by the lack of conceptual progress over more than two decades, I am tempted to speculate that a computer program will not gain the title of International Master before the turn of the century and that the idea of an electronic world champion belongs only in the pages of a science fiction book.

Researchers expected that a large network of computers would cooperate against Levy, until Chess 3.0, a program written by Larry Atkin, Keith Gorlen, and David Slate of Northwestern University, won the first United States Computer Chess Championship in 1970. Although Chess 4.0 in 1973 and 1974 achieved a United States Chess Federation rating higher than that of the average tournament player, until 1977 no computer program was good enough to pose a serious threat to Levy. In April 1977 he played a two-game match against Slate and Atkin's Chess 4.5, which had done well in human events, including winning the 1977 Minnesota Open, and had defeated Levy in blitz conditions. After Levy won the first game, the second was not played since Levy could not possibly lose the match. On 17 December, Levy played a two-game match against Kaissa; once again Levy won the first game and the match was terminated. In August 1978, Levy played a two-game match against MacHack; this time both games were played, Levy winning 2-0.

The final match necessary for Levy to win the bet also was played in August and September 1978 at the Canadian National Exhibition, against Chess 4.7, the successor to Chess 4.5. Levy won the bet, defeating 4.7 in a six-game match by a score of 4.5-1.5. The computer scored a draw in game two after getting a completely winning position but being outplayed by Levy in the endgame, and a win in game four - the first computer victory against a human master in a tournament - when Levy essayed the very sharp, dubious Latvian Gambit. Levy wrote, "I had proved that my 1968 assessment had been correct, but on the other hand my opponent in this match was very, very much stronger than I had thought possible when I started the bet." He observed that, "Now nothing would surprise me (very much)."

To further stimulate the growth of computer chess, Levy offered $1,000 to the authors of the first chess program to defeat him in a four- or six-game match; Omni magazine added $4,000 to this, for a total of $5,000. In 1989, the authors of the Deep Thought program won the prize when their program beat Levy.

In 1996, Popular Science asked Levy about Garry Kasparov's impending match against Deep Blue. Levy confidently stated that "...Kasparov can take the match 6 to 0 if he wants to. 'I'm positive, I'd stake my life on it.'" In fact, Kasparov lost the first game, and won the match by a score of only 4-2. The following year, he lost their historic rematch 2.5-3.5.

On 28 June 2011, David Levy and the International Computer Games Association (ICGA) concluded their investigation and determined that Vasik Rajlich in programming Rybka had plagiarised two other chess software programs: Crafty and Fruit. According to Levy and the ICGA, Vasik Rajlich failed to comply with the ICGA rule that each computer chess program must be the original work of the entering developer and that those "whose code is derived from or including game-playing code written by others must name all other authors, or the source of such code, in their submission details".

In response to the suspension, Vasik Rajlich was interviewed by Rybka fan Nelson Hernandez, in which he responded to the ICGA's allegations in a statement and answered questions about the controversy and his opinions on it.

In January 2012, ChessBase.com published an article by Dr. Søren Riis. Riis, a computer science professor at Queen Mary University of London, was critical of Levy's and the ICGA's decision, the investigation, the methods on which the investigation was based, and the panel members themselves. ICGA President David Levy and University of Sydney research fellow in mathematics Mark Watkins responded to Riis' publication with their own statements defending the ICGA panel and findings, respectively.

In February 2012, ChessBase published a two-part interview with Levy in which he answered many questions about the ICGA's decision to ban Rybka.