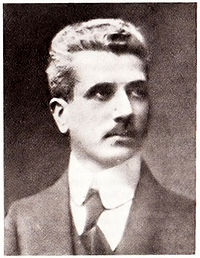 Alexander Davidovich Flamberg born in Warsaw (then Russian Empire), spent his early years in England, where he learned to play chess. After return to Warsaw, he became one of the strongest Polish chess players. In 1900, he took 2nd, behind Salomon Langleben, in Warsaw. He won the Warsaw championships in 1901 and 1902. Flamberg played his first strong tournament in Łódź (Quadrangular) in 1906, where he took 3rd, behind Akiba Rubinstein and Mikhail Chigorin.

In July/August 1914, he took 17th in Mannheim (the 19th DSB Congress, Alekhine won). After the declaration of war against Russia, eleven "Russian" players (Alekhine, Bogoljubow, Bogatyrchuk, Flamberg, Koppelman, Maljutin, Rabinovich, Romanovsky, Saburov, Selesniev, Weinstein) from the interrupted Mannheim tournament were interned by Germany. In September 1914, four of them (Alekhine, Bogatyrchuk, Saburov, and Koppelman) were freed and allowed, through Switzerland, to return home. The Russian internees played eight tournaments, the first in Baden Baden (1914) and all the others in Triberg (1914/15, 1915, 1916, 1917). The tournaments were mostly won by Bogoljubow (five times). The winners were also: Flamberg in 1914, and Ilya Rabinovich in 1916 and 1917 (last one tied with Alexey Selezniev).