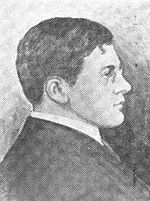 Born in Boston, he spent a few years in Germany, studying mathematics. By the end of his sojourn in Europe, he won several brilliant games in 1900 and 1901 at Café de la Régence in Paris, and in Antwerp and Heidelberg.

He played for the Manhattan Chess Club in cable matches against Franklin Chess Club of Philadelphia, and Chicago Chess Club in 1904-1906, and twice in the Anglo-American cable chess matches between Britain and the United States (1907 and 1911).