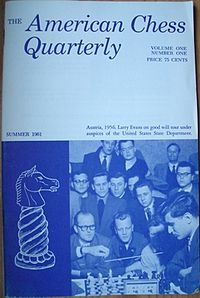 The American Chess Quarterly was a chess magazine that was published in the United States from Fall 1961 to 1965 by Nature Food Centres. Sixteen issues were published, in four volumes of four issues each, from Fall 1961 through April-May-June 1965. The publication count is sometimes considered to be Seventeen issues because Volume One Number Three was a two-part issue. Its principal editor was American grandmaster Larry Evans. Complete sets of the American Chess Quarterly magazine are becoming more difficult to acquire and typically command prices at auction in the $1,000-$2,000 range.