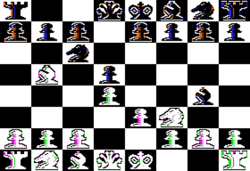 A screenshot from Sargon I for the Apple II

Sargon (or SARGON) is a line of chess-playing software for personal computers.

The notation screen from Sargon I

The name was originally written entirely in capitals because early computer operating systems such as CP/M did not support lower-case file names.

SARGON was introduced at the 1978 West Coast Computer Faire where it won the first computer chess tournament held strictly for microcomputers, with a score of 5-0. This success encouraged the authors to seek financial income by selling the program directly to customers. Since magnetic media were not widely available at the time, the authors placed an advert in Byte Magazine and mailed $15 photocopied listings that would work in any Z80-based microcomputer. Availability of the source code allowed porting to other machines. For example, the March-April 1979 issue of Recreational Computing describes a project that converted Sargon to an 8080 program by using macros. Later the Spracklens were contacted by Hayden Books and a book was published.

When magnetic media publishing became widely available, a Navy Petty Officer, Paul Lohnes, ported Sargon to the TRS-80, altering both graphics, input, and housekeeping routines leaving the Spracklen's chess-playing algorithm intact. Paul consulted with the Spracklens, both living in San Diego at the time, to make the TRS-80 version an instant success with the help of Hayden Book's newly established software division: Hayden Software. Paul was not involved in further refinements to the TRS-80 version due to his reassignment to sea duty shortly after signing the deal with Hayden Software. In the early 1980s SARGON CHESS was ported to several earlier microcomputers, i.e. NASCOM (by Bits & PCs, 1981), Exidy Sorcerer, Sharp MZ 80K, and many others. A complete rewrite was necessary later for the Apple II port, made by Kathleen's brother Gary Shannon. Both were published by Hayden Software.

The Spracklens made significant improvements on the original program and released Sargon II. In 1978 it tied for third at the ninth North American Computer Chess Championship despite being seeded ninth of 12 entries. Sargon finished only behind Belle and Chess 4.7, and defeated AWIT - running on a $5 million Amdahl mainframe - amazing the audience. That year they published a series of articles in BYTE on computer chess programming, stating "we think it would be nice if not everyone had to reinvent the wheel".

Sargon II was ported to a variety of personal computers popular in the early 1980s. The game engine featured multiple levels of lookahead to make it more accessible to beginning chess players. BYTE in 1980 estimated that Sargon II had a 1500 rating at the highest tournament-time difficulty level, and speculated that it was the best chess program on sale, including dedicated devices.

Sargon 2.5, sold as a ROM module for the Chafitz Modular Game System, was identical to Sargon II but incorporated pondering. It received a 1641 rating at the Paul Masson tournament in June-July 1979, and 1736 at the San Jose City College Open in January 1980.

Sargon 3.0 finished in seventh place at the October 1979 North American Computer Chess Championship. The competition had improved, but 3.0 drew against Cray Blitz and easily defeated Mychess, its main microcomputer rival. In December 3.0 easily won the second microcomputer championship in London.

In 1980, the Spracklens' Reversi game finished in first place at a computer tournament at Northwestern University, and in 1981 it finished in third place at the Santa Cruz Open Othello Tournament.

Sargon III was a complete rewrite from scratch. Instead of an exchange evaluator, this version used a capture search algorithm. Also included was a chess opening repertoire. This third version was written originally for the 6502 assembler and was commercially published by Hayden Software in 1983. Apple contacted the Spracklens and, after a port for 68000 assembly, Sargon III was the first third-party executable software for the Macintosh.

The famous three-time world chess champion Mikhail Botvinnik played a game with Sargon in 1983 at Hamburg. He did not play his best moves but only tested the program's capabilities. Botvinnik himself was also involved in chess program development.

Video magazine listed Sargon III third on its list of best-selling video games in February 1985, and fourth on the best-seller list in March 1985, with II Computing listing the game second on its list of top Apple II games in October-November of the same year.

BYTE in 1980 stated "buy it. Sargon II is everything Sargon I should have been ... Nearly every deficiency of Sargon has been corrected." The magazine concluded that the game "is about all we computer chess players could wish for". It also favorably reviewed the ROM-cartridge Sargon 2.5, but advised Sargon II owners to "wait for Sargon 3". Ahoy! in 1984 stated that the Commodore VIC-20 version of Sargon II '​s "chess-playing capability is excellent" and a bargain compared to dedicated chess computers, and gave a similarly favorable review of the Commodore 64 version. The Addison-Wesley Book of Atari Software 1984 gave the game an overall A- rating, stating that only Chess 7.0 was superior on a microcomputer and concluding that it "is a very worthy opponent for any chess enthusiast". Tim Harding in 1985 called Sargon II the first "halfway competent chess program" for home computers. He stated that "in early 1984 the VIC/Sargon II combination was still among the strongest home computer chess programs" despite its age, with "many features superior to today's weaker amateur programs".

PC Magazine rated Sargon III 13.5 points out of 18. The reviewer criticized the "too abstractly drawn" pieces but praised the game's speed and skill, describing himself as "not a bad player" but only winning 10% of games at the lowest difficulty level.