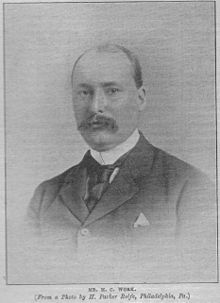 Milton Cooper Work (September 15, 1864 - June 27, 1934) was an American authority on whist, bridge whist, auction and contract bridge. At least during the 19th century he was a cricket player, writer, and official.

Work, Sidney Lenz, and Oswald Jacoby were named to its bridge hall of fame by The Bridge World monthly magazine in 1965, which brought the number of members to six. They were all made founding members of the ACBL Hall of Fame in 1995.

Work was born in Philadelphia, Pennsylvania, where he graduated from the University of Pennsylvania and practiced law from 1887 to 1917. He and Wilbur C. Whitehead toured the country in 1917 "organizing bridge competitions and lecturing on bridge, to promote the sale of Liberty bonds". The tour was successful enough that he made bridge a full-time occupation rather than return to law.

Work was the manager of the Philadelphian cricket team that toured England in 1897. He had earlier played for Belmont Cricket Club between at least 1880 and 1887. He also played cricket, tennis and baseball for the University of Pennsylvania in 1887. He edited the American Cricketer magazine.

In his writings on bridge during the last seven years of his life, Work adopted Bryant McCampbell's 1915 suggestion for evaluating balanced hands using a point count method: Ace = 4, King = 3, Queen = 2 and Jack = 1. Although Work had strongly opposed point count methods for 25 years, beginning about 1927 he became a strong advocate of the 4-3-2-1-½ point count - so much so that it became known as the Work Point Count. Subsequently, his employee and disciple Charles Goren adapted it to value all hands. It is still used by players today. In 1927 Work was named American Bridge League (ABL) Honorary Member of the Year.