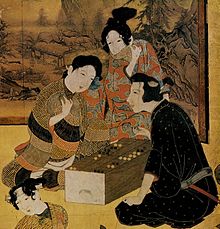 Ban-sugoroku plays identically to backgammon (it even has the same starting position), except for the following differences:

The game is thought to have been introduced from China (where it was known as Shuanglu) into Japan in the sixth century.

It is known that in the centuries following the game's introduction into Japan it was made illegal several times, most prominently in 689 and 754. This is because the simple and luck-based nature of sugoroku made it an ideal gambling game. This version of sugoroku and records of playing for gambling continuously appeared until early Edo era. In early Edo-era, a new and quick gambling game called Chō-han (丁半) appeared and using sugoroku for gambling quickly dwindled.

This variant of the backgammon family has died out in Japan and most other countries, with the Western style modern backgammon (with doubling-cube) having some avid players.

A simpler e-sugoroku, with rules similar to snakes and ladders, appeared as early as late 13th century and was made popular due to the cheap and elaborate wooden block printing technology of the Edo period. Thousands of variations of boards were made with pictures and themes from religion, political, actors, and even adult material. In the Meiji and later periods, this variation of the game remained popular and was often included in child-oriented magazines. With ban-sugoroku becoming obsolete, now the word sugoroku almost always means e-sugoroku.

The video game Samurai Warriors 2 features a mini-game named Sugoroku, but it bears very little resemblance to the above described games. Instead, it plays very much like Itadaki Street, Wily & Right no RockBoard: That's Paradise, or a simplified version of Monopoly: players take turns in moving around a board, the spaces of which are designated as different territories of Japan. By landing on an unoccupied space, the player is able to buy that space for a set amount of money. If one player lands on a space purchased by another, they must pay a fee to that player, or else can choose to challenge the player for control of that space (utilising the main Samurai Warriors 2 game engine for special challenge games). Also present on the board are "Shrine" spaces, which are roughly analogious to Monopoly's Chance and Community Chest spaces.