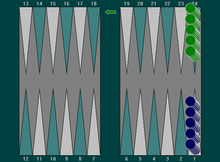 Plakoto is a tables game popular in Greece. The object of Plakoto is for the player to bring all their checkers around to their own home board and then bear them off. The player who bears off all of his checkers first wins the game. This game is usually played along with two other variants, Fevga and Portes (similar to backgammon). Together these three games are called Tavli, and are played in sequence usually one after the other. They have matches of three, five or seven points. A Bulgarian version of Plakoto is known as Tapa.And also as Tsilido, in Cyprus.

Every player has fifteen checkers to start with. One player's checkers are placed on his one-point. The other player's checkers are placed on his 24 point. The players have to move their checkers in different direction on the Plakoto board. At the start of the game each player rolls one die and the player with the highest roll gets the chance to start. Unlike backgammon the player has to again roll the die to begin his first turn. A player who has won a game starts the next game. The number of points, or pips, or the places a player can move his checkers is decided by the roll of the die.

The doubles in Plakoto are played twice. For example, a roll of 3-3 means that the player can use the three’s four times. If it’s possible the player must use both the numbers of a roll and all four numbers in the case he draws a double in the roll of dice.

Bearing off in the game of Plakoto starts after a player has moved all of his fifteen checkers on his home board. A player can bear off by rolling a number that corresponds to the point on which the checker is placed. If there is no checker on the point indicated by the roll, then the player has to make a legal move using a checker on a higher-numbered point. If there are no checkers on higher-numbered points, the player must remove a checker from the highest point that has a checker. In this way he can remove all of his checkers from the board

The first player who bears off all his fifteen checkers is the winner of the game. If the losing player has successfully borne off at least one checker, he loses only one point; otherwise two points are lost.