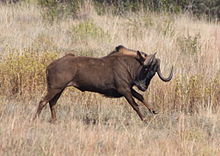 The wildebeest represents the compound leaper in Wildebeest Chess.

Wildebeest Chess is a chess variant created by R. Wayne Schmittberger in 1987. The Wildebeest board is 11x10 squares. Besides the standard chess pieces, each side has one wildebeest and two camels. The inventor's intent is "to balance the number of 'riders' - pieces that move along open lines - with the number of 'leapers' - pieces that jump". (So for each side, two knights, two camels, and a wildebeest balance two rooks, two bishops, and a queen.)

The game was played regularly in the (now defunct) correspondence game club NOST. 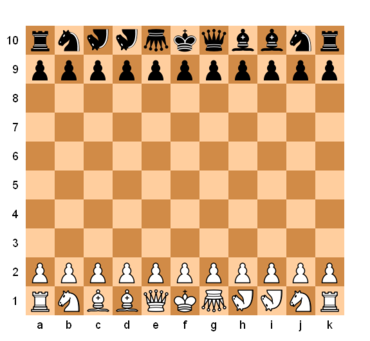 Pieces and pawns move and capture the same as they do in standard chess, except for two new pieces, and the pawn's ability to advance to the players' fifth ranks in a single move from either their second or third ranks. Wildebeest Chess differs from the standard game in that a win can be achieved either by checkmate or stalemate. In both cases the losing side has no legal moves.

The wildebeest moves and captures as a camel and a chess knight.

The camel is a (1,3)-leaper fairy chess piece. It moves and captures like an elongated move of a chess knight - jumping in a 2x4 (squares) rectangular pattern over any intervening men. Each camel is thus limited to squares of one color.

Normal conventions apply when castling, with the only difference that the castling player can choose to slide his king one, two, three, or four squares. As in chess, the castling rook finishes on the opposite side of the king on the square adjacent.