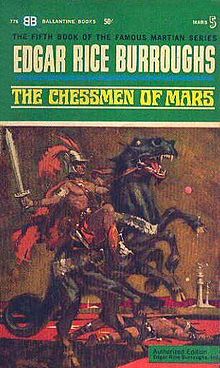 The 1963 Ballantine Books paperback edition of The Chessmen of Mars, showing a live version of Jetan being played in the city of Manator. Cover illustration by Robert K. Abbett.

Jetan, also known as Martian Chess, is a chess variant with unclear rules. It was created by Edgar Rice Burroughs as a game played on Barsoom, his fictional version of Mars. The game was introduced in The Chessmen of Mars, the fifth book in the Barsoom series. Its rules are described in Chapter 2 and in the Appendix of the book.

Jetan is played on a black and orange checkered board of 10 rows by 10 columns, with orange pieces on the "north" side and black pieces on the "south". 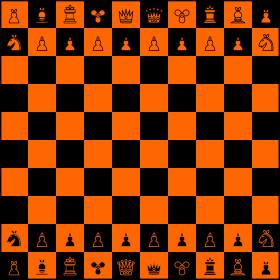 Each player has the following playing pieces: one Chief, one Princess, two Fliers; two Dwars (Captains); two Padwars (Lieutenants); two Warriors; two Thoats (Mounted Warriors); and eight Panthans (Mercenaries). The Chief, Princess, Fliers, Dwars, Padwars and Warriors are positioned along the row closest to the player with the Chief at left center, the Princess at right center, and the Fliers, Dwars, Padwars and Warriors arranged to flank each, with the Fliers innermost and the Warriors outermost. The Thoats and Panthans are positioned along the next row out from the player with the Thoats flanking the Panthans. The complete arrangement of each side follows:

Throughout the Internet there is seemingly much confusion regarding the play of this chess variant. The sole existing authority on Jetan being Edgar Rice Burroughs, with the finalized version of the rules presented in the Appendix of The Chessmen of Mars. This article attempts to match it.

Panthans are limited to one step per move. forward, diagonally forward and sideways. Other pieces take two or three. These may change their direction of movement at each step in the course of a move, so long as this is in a direction permitted for that piece. Each must take the full number of steps specified for it. No piece can cross the same square of the board twice during the course of a move. The Princess and the Flier (Odwar), may jump over a piece that is in their path.

A capture is made when a piece lands on a square occupied by an opposing piece with its final step or jump; the Princess may not make such a move.

The pieces move as follows:

This is equivalent to three moves of a chess king, except that it cannot double back and may only capture at the third step.

It may make one ten space "escape" at any time during gameplay, jumping to any unoccupied space on the board.

Per Burroughs, in an older version of Jetan these pieces were called Odwars.

If it must, then an opposing piece in a [.] square would block the Padwar (at [O], which could not move to an [X] square in that direction. If not, then the Padwar could capture a piece at [.]. Presumably it may only capture once per turn.

These rules result in too many draws for the tastes of most players so a number of variants have been proposed to address this issue, the simplest being that the capture of a Chief by a piece other than a Chief merely retires the Chief without drawing or ending the game.

According to The Chessmen of Mars, Jetan was said to represent an ancient war between the Yellow and Black races of Barsoom. This explains why the orange pieces begin on the "north" side and black pieces on the "south", because Barsoom's Yellow and Black races inhabit its north and south polar regions, respectively.

The second half of The Chessmen of Mars takes place in the city of Manator, where the most popular civil event involves human beings fighting to the death in a life-sized Jetan game viewed by hundreds of spectators. The "board" is large enough that some of the pieces are mounted on Thoats and yet still fit in a single "square". However, this life-and-death version departs from the rules of Jetan in one very significant way: When one piece lands on a square occupied by another, the first does not automatically replace the second. Rather, the two pieces fight to the death, and the winner of the swordfight wins the square. The lone exception involves the Princess: if one side's piece lands on a square occupied by the other side's Princess, no battle occurs, and the first side wins the game.

Similar games in other fiction

Burroughs' Jetan may have inspired authors of later planetary romances to invent similar extraterrestrial versions of chess fought with human beings. Instances of such homage include: