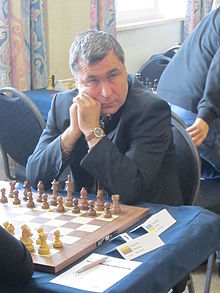 The Tradewise Gibraltar Chess Festival is a chess tournament held annually at the Caleta Hotel in Gibraltar since 2003. Its eleven days of competition usually run from late January to early February. The main event, the Masters, is open to all, and was voted "Best Open Event in the World" by the Association of Chess Professionals in 2011, 2012, and 2013.

The inaugural festival, then known as the Gibtelecom Gibraltar Chess Festival, took place in 2003. Fifty-nine competitors took part, of whom 24 held the FIDE grandmaster title. The 2014 Masters tournament comprised 256 players of whom 68 were grandmasters and 40 held the international master title. The festival also features four five-day tournaments restricted to players below a certain rating. In the 2014 festival there were players from 59 different federations.

The Gibraltar Chess Festival is well known for giving particular prominence to women's chess. In the 2014 festival 53 women competitors took part, amounting to 15% of the total field.

The highest score achieved in a Gibraltar Masters event has been 9 points from a possible 10, made by Vassily Ivanchuk in 2011, with a performance rating of 2968.

In 2012, special stamps were issued by the Gibraltar Post Office to commemorate the tenth edition of the chess festival.

Since 2011 the Director of the Tradewise Gibraltar Chess Festival has been Stuart Conquest, grandmaster and 2008 British Chess Champion.

Since 2011 an annual Gibraltar Junior International Chess Festival, also held at the Caleta Hotel, has been organised. It lasts five days and takes place in August. It comprises two events: under-16 and under-12.

Since 2007, ties for first place in the Masters have been resolved by a tie-break.