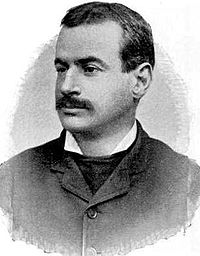 Mason was born in Kilkenny in Ireland. His original name is unknown: he was adopted as a child and only took the name James Mason when he and his family moved to the United States in 1861. There he learned chess and eventually secured a job at the New York Herald.

Mason made his first mark on the chess scene in 1876, when he won the Fourth American Congress in Philadelphia, the New York Clipper tournament, and defeated Henry Bird in a match by the comfortable margin of 13-6. In 1878 he settled in England. His best tournament results were third at the strong Vienna 1882 tournament, third at Nuremberg 1883 and equal second at Hamburg 1885. At Hastings 1895, often considered the strongest tournament of the nineteenth century, he finished tied for 12th-14th with 9½ points of 21 possible.

In 1903 he became seriously ill and had to curtail almost all activities for the remainder of his life. He died on 12 January 1905 in Rochford, Essex, and is buried in nearby Thundersley churchyard.

According to Chessmetrics, at his peak in October 1876 Mason's play was equivalent to a Chessmetrics rating of 2715, and he was ranked number 2 in the world, behind only Wilhelm Steinitz. However, Mason was ranked the number 1 player in the world, albeit with a slightly lower rating, during 11 separate months between August 1877 and June 1878. His best single performance was at Vienna 1882, where he scored 15 of 23 possible points (65%) against 2622-rated opposition, for a performance rating of 2732.