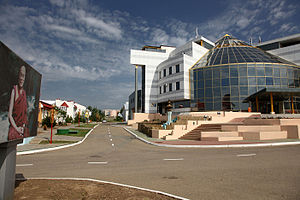 The main building of the Chess City complex

Chess City (also referred to as City-Chess; Russian: Сити-Чесс Siti-Chess or Город Шахмат Gorod Shakhmat) is a large complex devoted to chess and chess competitions located east of Elista, Kalmykia, in Russia. The neighborhood-size development consists of a central, four-story domed City Chess Hall surrounded by an Olympic-style village of Californian-Mediterranean Revival Style architecture. The site has a conference center, public swimming pool and a museum of Kalmyk Buddhist art. The complex features sculptures and artwork devoted to chess, including a statue of Ostap Bender, a fictional character of popular books written by Ilya Ilf and Yevgeni Petrov, who proposed a creation of world chess capital. The complex has been used to host visiting dignitaries like the Dalai Lama.

Completed in 1998, the idea and development of Chess City is directly the result of Kirsan Ilyumzhinov, Kalmykia's millionaire President who has ruled the republic since 1993 and been president of FIDE, the international governing body of chess, since 1995. A fanatical chess enthusiast, Ilyumzhinov had the complex built in time for the 33rd Chess Olympiad.

Future plans for Chess City include a water sport complex, skiing center, government buildings, business centers, opera and ballet theaters, museums, a conservatory, an art school, religious academies, a center of traditional medicine, and residences for any ambassadors who may be accredited to Kalmykia.

Kalmykia is a poor republic of approximately 300,000 people located in the barren steppe regions in the southeastern corner of Europe. Without much in terms of natural resources, the nation is economically depressed and many of its citizens live in poverty. As a result, the construction of the opulent Chess City was greatly criticized for spending large sums of money on a tourist resort. Chess tournament winners are sometimes rewarded with a diamond tiara. Additionally, the desert climate of the area puts many of the planned expansions for Chess City, like the water sports complex, under scrutiny.