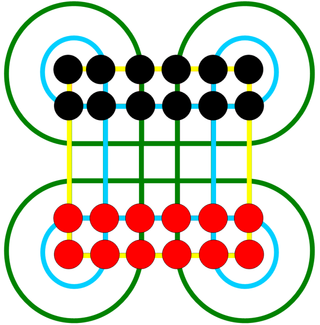 Surakarta is a little-known Indonesian strategy board game for two players, named after the ancient city of Surakarta in central Java. The game features an unusual method of capture which is "possibly unique" and "not known to exist in any other recorded board game".

The real name of the game is permainan (meaning the game in Bahasa Indonesia). In Java, the game is also called dam-daman. It was first published in France in 1970 as "Surakarta". The game is called "Roundabouts" in Sid Sackson's The Book of Classic Board Games.

Traditionial Indonesian game pieces are shells versus pebbles or stones, with the board grid inscribed in sand or volcanic ash. But any easily distinguished sets of pieces may be used (e.g. red versus black counters or checkers, as illustrated). Players begin the game with 12 pieces each.

Players decide who moves first, then turns alternate. The object of the game is to capture all 12 of the opponent's pieces; or if no further captures are possible, to have more pieces remaining on the board than the opponent.

Pieces always rest on the points of intersection of the board's grid lines. On a turn, a player either moves one of his pieces a single step to an unoccupied point in any direction (forwards, backwards, sideways, or diagonally), or makes a capturing move special to Surakarta.

A capturing move consists of traversing along an inner or outer circuit (colored blue or green in the illustration) around at least one of the eight corner loops of the board, followed by landing on an enemy piece, capturing it. Captured pieces are removed from the game.

A game is won when a player captures all 12 of his opponent's pieces. If neither side can make headway, the game is ended by agreement and the winner is the player with the greater number of pieces remaining on the board.

A match consists of more than one game. Players agree beforehand how the winner will be determined. A couple methods are typically used:

Each game is scored by the number of pieces remaining at the end of the game. The winner is the player with higher total points after all games have finished.

New games are played until one player reaches or exceeds the winning point total.

In general, pieces are more powerful toward the center of the board, where they are in one or two sets of loops. Pieces on the corner, on the other hand, are easy to trap, as the spaces next to the corner can be attacked in a number of directions.

Surakarta is one of the games played regularly at the annual Computer Olympiad.

Surakarta variants are also among the traditional board games played in rural China and Korea, with slightly different rules and boards. In these variants, pieces cannot step diagonally, and can slide along the outer circuit without capturing a piece.