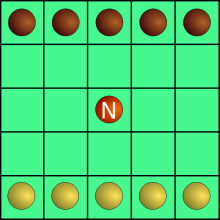 An example of Neutron.

Neutron is a two-player abstract strategy game invented by Robert A. Kraus. The game was first published in the Playroom section of Games & Puzzles 71 in July/August 1978. It is a game where each player moves two different pieces in a single turn without the use of dice. Games like Backgammon and Risk allow a player to move two or more different pieces in one turn, however, these games use dice. One other game that uses this concept is the L Game by Edward De Bono, and that game is also a modern invention.

There are 15 variants to this game. Neutron and some of its variants are some of the main games featured in Zillions of Games.

The game has been solved to some degree. Analysis has shown that the first player wins. It is unknown whether the other variants have been solved or not, and to what degree.

It is normally played on a 5 x 5 board. There are 15 variants to this game, and the size of the board may change. Each player has five soldiers. There is also a neutral piece called the Neutron that is played by both players.