Luzhanqi (Chinese: 陆战棋; pinyin: lùzhànqí) (lit. “Land Battle Chess”) is a two-player Chinese board game . There is also a version for four players. It bears many similarities to Dou Shou Qi, Game of the Generals and the Western board game Stratego. It is a non-perfect abstract strategy game of partial information, since each player has only limited knowledge concerning the disposition of the opposing pieces. Because of the Chinese nature of the game, terms used within the game may vary in translation.

Luzhanqi is mainly played by children as a precursor to games like xiangqi and weiqi, but people of other ages may also enjoy it as a game of leisure.

The aim of the game is to capture the opponent’s flag through penetrating his defenses, while trying to prevent him from capturing the player's own flag.

The Luzhanqi board has a number of features which affect how pieces move. 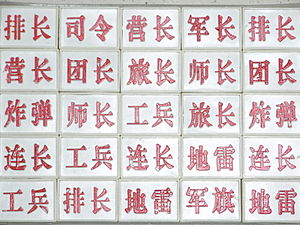 Each player has 25 pieces, which are identical except for markings on one side. They are listed here in order of order, where any piece of a higher order may capture one of lower order (if the enemy is of the same order, both pieces will be removed from the board). Each player has:

Some of these pieces have special features and abilities:

Play then proceeds by turns, with each player moving one piece per turn. On each move a piece may move to any connected adjacent space, or use the Railroad lines to travel to more distant spaces.

When a piece lands on a space occupied by an opposing piece, the respective orders of the two pieces are compared (either by the players or by an independent referee). The lower-ordered piece is removed from the board; if the two are of equal order, both are to be removed from the board. Special pieces (see above) also play their respective roles.

As soon as a player's Field Marshal (order 9) is lost (having collided with the opposing Field Marshal, or was destroyed by a bomb or landmine), he must declare so by revealing the headquarters in which his Flag is placed.

It is feasible to send the Brigadier Generals or Major Generals (order 6 and 7) to attack the opponent's pieces, for these pieces are effective in getting rid of lower-ordered pieces and identifying those of higher order. Smaller-ordered pieces can be used to infiltrate the opponent's campsites, while Engineers are employed to remove landmines when the route to the opponent's fifth and sixth ranks is clear. Bombs should be sent to campsites as soon as possible to prevent accidental bombing, and should only be employed to destroy the highest-ordered pieces of order 8 and 9, to defend one's own flag from being captured, or to destroy a blocking landmine. The arrangement of landmines and nearby pieces should also be carefully thought out to secure the defense of the headquarters. 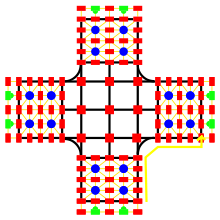 One of the main spin-offs of Luzhanqi is derived from arranging a board for four-players, with each taking up a territory adjacent to another at 90-degree angles. Players at opposite ends team up to defend against the other pair; the game ends when both players of a team has their flags captured, or when all sides are unable to defeat each other and thus agree to a draw.

If a player has his flag captured, he must admit defeat, thus removing all of his pieces off the board. He may also do so by resigning if his situation looks hopeless. In this case, if his ally across the board is still in the game, the game continues; otherwise, it ends with the victory of the other team. Even if a player admits defeat or resigns, his team may still win if his ally is able to defeat both opposing teams.

As shown in the diagram, there will no longer be Mountains or No-man's Lands, for the 9 shared spaces in the middle of the territories will be public territory; there will, however, be curved railroads, where the rule for railroads still apply across the curve for all pieces: moving pieces can still travel along any part of the yellow line in the diagram, but not in the direction of the arrow. Engineers are still spared from this restriction and may move to any space accessible via railroads.

There are many variant rules of Junqi. Before a game, players usually decide which rule to use.