A lotería board and traditional ways to win

Lotería is a game of chance, similar to bingo, but using images on a deck of cards instead of plain numbers on ping pong balls. Every image has a name and an assigned number, but the number is usually ignored. Each player has at least one tabla, a board with a randomly created 4 x 4 grid of pictures with their corresponding name and number. Players choose what tabla they want to play with, from a variety of previously created tablas. Each one presents a different selection of images.

Lotería is the Spanish word for lottery. The deck is composed of a set of 54 different images, each one in a card. To start the game, the caller (cantor, or singer) randomly selects a card from the deck and announces it to the players by its name, sometimes using a riddle or humorous patter instead of reading the card name. The players with a matching pictogram on their board mark it off with a chip or other kind of marker (many Mexican people traditionally use small rocks, crown corks or pinto beans as markers). The first player with four chips in a horizontal, vertical or diagonal row, squared pattern,any other previously specified pattern, or fills the tabla first shouts "¡Lotería!" (Lottery!) or "¡Buenas!" (Good!) and is the winner. 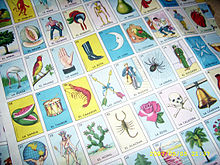 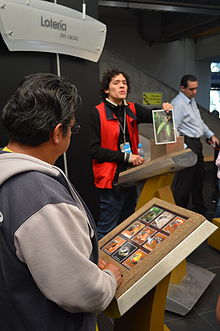 The origin of lottery can be traced far back in history. The game originated in Italy in the 15th century and was brought to New Spain (Mexico) in 1769. In the beginning, lotería was a hobby of the upper classes, but eventually it became a tradition at Mexican fairs.

The most famous maker of the card sets nowadays is Pasatiempos Gallo, S.A. de C.V., headquartered in the city of Santiago de Querétaro, (operating as Don Clemente, Inc. in the United States), which began publishing the game in 1887 when Don Clemente Jacques started to produce the cards. The current images have become iconic in Mexican culture, as well as gaining popularity in the US and some European countries. Other popular Loteria sets are Loteria Leo and Loteria de mi tierra. 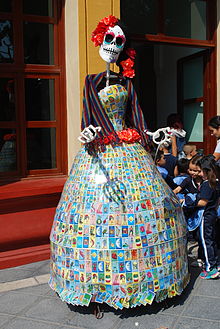 Catrina in Chapala, Jalisco with dress of lotería cards

The following is a list of all the original 54 Lotería cards, traditionally and broadly recognized in all of Mexico. Below each card name and number, are the riddles (in Spanish) sometimes used to tell the players which card was drawn. However, there are several less traditional set of cards, depicting different objects or animals.