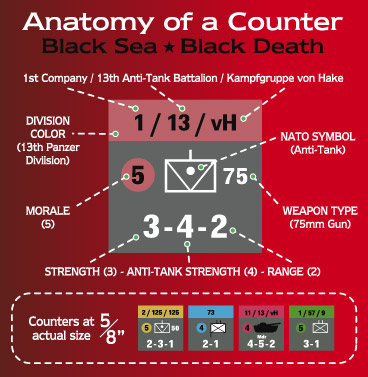 An example of a counter with a large amount of information, from the wargame Black Sea-Black Death by Last Stand Games. 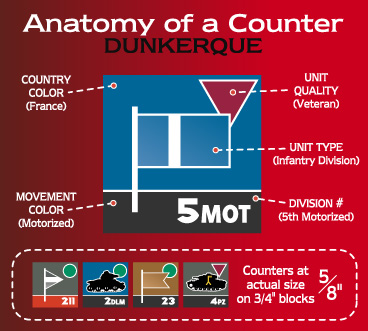 An example of a sticker for a block boardgame counter from the wargame Dunkerque by Last Stand Games.

Boardgame counters are usually small cardboard squares moved around on the map of a wargame to represent armies, military units, or individual military personnel. The first wargame based on cardboard counters was War Tactics or Can Great Britain be Invaded? invented by Arthur Renals of Leicester in 1911. The first wargame bringing counters to a mass-market was Tactics, invented by Charles S. Roberts in 1952. Traditional wargames typically have hundreds of counters (The Russian Campaign, 225;GI: Anvil of Victory, 856; Terrible Swift Sword, >2,000). Squad Leader had counters of different sizes: 520 ½-inch counters and 192 ⅝-inch, with the different sizes used for different purposes.

Boardgame counters are often closely related to military map marking symbols, such as those seen in the NATO standard APP-6a, and often include a simplified APP-6a representation as part of the counter.

In microgames, counters were printed on one or more sheets of thick paper which the player had to cut for themselves rather than the die-cut cardboard sheets included with most board wargames. Dragon Magazine used to include counters printed on a cardstock centerfold for monthly games (especially by Tom Wham).

In block wargames, wooden blocks are used instead of cardboard as the counters to represent pieces, in order to emulate the fog of war (by placing the blocks upright to make the information visible to only one of the players).

Although counters are typically square, some games use oblong rectangles as counters for individual ships, as in Flying Colors, or for land units in tactical-scale games when the designer wishes to emphasize the facing or linearity of the unit, as in the Great Battles of History series. Other variations are of course possible. The unit counters in Luftwaffe are circular, while one game covering the Eastern Front in World War II had hexagonal counters.