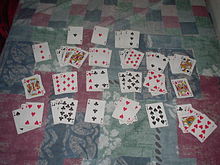 A game of in progress 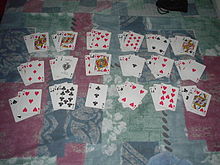 La Belle Lucie, The Fan, Clover Leaves, Three Shuffles and a Draw, Alexander the Great, Trefoil or Midnight Oil is a solitaire where the object is to build the cards into the foundations.

All cards are visible from the start, but this does not imply that this game is solvable with strategy. The default rule is very hard to win. The majority of games cannot be solved. For example, moving a single card onto another blocks that stack until both cards can be removed to the foundations. Any setup that has a lower card of a specific suit below a higher of the same suit, or all kings not on the bottom of each cascade cannot be solved without cheating. The shuffle and redeal is of little help. For each king left in the second redeal, there is a 66% chance that the cascade cannot be solved (if the king is not lowest). Moving aces out (Trefoil rule) has cosmetic character.

Variations are listed in the order they will occur in the game play:

The "no redeal rule" and the "king rule" are often used together since redeals are needed to get to cards under a king unless it’s allowed to move kings to empty fans.

Since all cards are visible after the deal, the basic strategy is to think before doing moves. A redeal is not always of much help, since it will give fewer fans than the initial deal.

Cards under a king are blocked until the redeal or until the king is moved to the foundations (if the "king rule" is not in effect).

For the "alternating colours rule for moves between fans"

The "alternating colours rule for moves between fans" will significantly change the strategy used in the game: