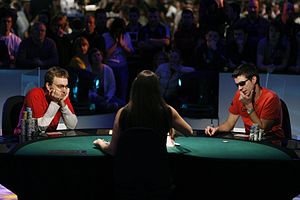 The Irish Poker Open is the longest running No Limit Texas hold 'em poker tournament in Europe and second longest in the world after the World Series of Poker.

First organised in 1980 by Terry Rogers, a well known Irish bookmaker, the tournament is Europe's largest and a fixture on the international poker calendar. It is traditionally held over Easter weekend each year.

Since Terry Rogers death in 1999 the tournament, originally held in Dublin’s Eccentric Club, has been hosted by tournament director and poker player Liam Flood and the Merrion Casino.

paddypowerpoker.com began sponsorship of the event in 2005 and oversaw the huge growth in the tournament. By 2006 the event, with 339 players, had outgrown the Merrion Casino and was held in Jury's Ballsbridge Hotel in Dublin. In 2007 the venue was changed to the Burlington Hotel, Dublin to accommodate the bigger field, while in 2008 and 2009 the Irish Open venue was Citywest Hotel, Dublin. In 2010 the tournament returned to the Burlington Hotel and numbers declined year on year up to 2015 which was inline with trends and decline in the online poker industry.

In 2016 the Irish Poker Open will return to Citywest Hotel for a week long festival from March 21st to 28th, culminating in the €500k Main Event. The 2016 Irish Poker Open will be managed by JP Poker and Countside Ltd, both companies have organised tournaments in both Ireland and Europe for the last 20 years.

Terry Rogers once declared “I have been the greatest single factor in the worldwide spread of competitive poker.”

One of his most enduring legacies was founding the Irish Open. In the late 1970s Terry started to hold poker tournaments for charity under the auspices of the Eccentric Club. According to Liam Flood, a fellow bookmaker and friend of Terry's the games would get "anywhere between 100 and 300 players playing five-card draw for £100 to £200 per game. That was a lot of people for that kind of money at the time. Every year Terry would go to America on business. In May 1979 he had a few days off and went to Las Vegas. He saw this high stakes poker game going on and met Benny Binion and the rest is history.”

Always one to spot an opportunity Rogers cemented his relationship with Binion and his band of high-rolling players by taking bets from them on the outcome of the games, offering the type of long odds the Americans had never seen before.

“Guys like Benny Binion, Doyle Brunson and Chip Reese really held Terry in high esteem,” states World Series of Poker bracelet winner and former Irish Olympic swimmer Donnacha O'Dea. “He’d give them great odds, better than any American bookie would give, but he still made sure he had a 20% edge.”

After the 1979 World Series Terry returned to Ireland enthusing about what he’d seen. Stud and draw were the poker variants of choice in Ireland but the new variation he’d seen in Vegas, no-limit hold’em, beat them all for excitement and skill.

In the following years he returned to Vegas for the World Series with Liam Flood but his bookmaking activities brought the attention of the Las Vegas Police Department and on one occasion Terry and Liam ended up being arrested and imprisoned. The irony of being jailed for gambling in Vegas was not lost on them according to Flood.

The Irish Open was organised under the auspices of the charity fundraising organization started by Terry called the Eccentric Club. It attracted mainly local players but Rogers already had is eye on expanding the event.

Donnacha O'Dea remembers the stunts Rogers pulled to generate interest in the Irish Open. “He’d publicise betting on the tournament in the Racing Post along with an event such as the Super Bowl so he could get around the law on advertising such events. He’d install an outsider such as ‘Suitcase’ Johnny as favourite. Poker players would then see these odds and think to themselves, ‘Well I’m much better than this guy who’s favourite’ and immediately want to take part in the tournament.”

The Irish Open fell into abeyance in the early 1990s as Terry concentrated on nursing his mother through ill health. It was resurrected again in the mid-1990s.

Relationship with the World Series of Poker

Terry’s annual trips to Las Vegas and the success of the first Irish Open led to the US players he had befriended at the World Series of Poker repaying their debt of gratitude for his generous bookmaking services by making a rare excursion from their home soil to play in Ireland in 1982 and 1983.

Donnacha and Liam remember the American invasions with glee. “One year Terry got them a yellow Rolls Royce for when they arrived at the airport. Another year he arrived with a white horse which Amarillo Slim, who was a real horseman, rode out of the airport.

“Those years he had Tom McEvoy, Jack Keller, Stu Ungar, Doyle Brunson, Chip Reese, and Perry Green from Alaska. It was funny to see them try to pay for goods in Killiney village with chips from Terry’s poker tournament, something they were used to doing in Vegas.”

The Irish Poker Open 2007 Main Event had a guaranteed prize pool of €2 million - twice the €1 million guarantee of 2006 but with a then-European record 708 players the prize pool swelled to more than €2.3 million.

English poker pro Neil Channing won €801,400 and the Irish Open title after defeating local favourite Donal Norton of Tipperary heads up. Norton took home €420,000 for his 2nd place finish. Thomas Dunwoodie finished in 3rd place ahead of Tim Blake (4th), Kai Danilo Paulsen (5th) and Edwin Tournier (6th). Channing added £50,000 to his winnings by putting a £500 bet on himself at 100/1 with Paddy Power at the midpoint of the four-day tournament.

Twenty-year-old Englishman James Mitchell won the title and €600,000 first prize, with Paul Carr from Limerick finishing in second place for €312,600. Rob Sherwood become the €100,000 Sole Survivor by outlasting all other paddypowerpoker.com qualifiers; he won an additional €163,300 for finishing in fourth position.