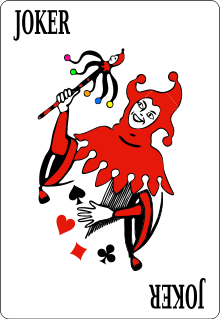 The Joker is commonly used as a bug.

A bug in poker is a limited form of wild card. One or both jokers are often added to the deck and played as bugs.

In draw poker played for high and pai gow poker, the bug is considered to be an ace, unless it can be used as a missing card to complete a straight or a flush, in which case it becomes the highest card which can complete the hand.

Holding the bug greatly increases the power of certain drawing hands. For example, playing for high, a natural four-straight such as Q-J-10-9 drawing one has nine outs to complete the hand, any king or eight or the bug. By contrast a four-straight including the bug can have as many as sixteen outs to complete the straight - Q-J-10-Joker can catch any ace, king, nine, or eight.