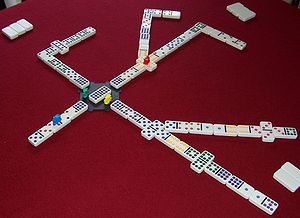 A typical game of Mexican Train with the branching doubles variation

Mexican Train, also known as simply Trains, is a game played with dominoes. The object of the game is for a player to play all the dominoes from his or her hand onto one or more chains, or "trains", emanating from a central hub or "station". The game's most popular name comes from a special optional train that belongs to all players. However, the game can be played without the Mexican Train; such variants are generally called "Private Trains" or "Domino Trains". It is related to the game Chicken Foot.

A double-twelve set of dominoes is marketed as the standard for Mexican Train, and accommodates up to 8 players. Other sets are commonly used as well. The following alternate sets are common, depending on the number of people playing:

In addition to dominoes, the game also requires:

Many sets of dominoes include a station and special train-shaped tokens for markers, and packaged games with a central "station" and custom tokens are available. However, the station piece is not strictly needed, and anything from coins to poker chips to even pieces of candy or slips of paper can be used as markers.

The object of all Trains games is to be the first player to place all of their dominoes. Dominoes may be placed onto the player's train, onto the Mexican train if available, or on the trains of other players under special circumstances.

At the start of each round, the dominoes are placed face side down, shuffled, and drawn by players to form their hands. Using the standard double-twelve set, players draw dominoes as follows:

Any remaining dominoes are placed to one side, forming the "boneyard".

With a standard double-twelve set, the player with the double-twelve plays first. In each successive round the next lower double is used until all doubles are used. The double-blank is the final round. If no one has the required double for the round, players each draw another tile simultaneously until it is found. The player with the required double opens the station by placing this double in the center as the "engine".

Play continues to the left. Each person lays one legally placed domino per turn, or two if the player's first domino is a double. If they are unable to, they must draw a domino from the boneyard. If they are able to lay that domino, they must do so immediately. Otherwise, their turn is over and play continues to the left, each player trying to place all their dominoes by playing matching dominoes one at a time, end to end.

A train can be as long as the players can make it; it only ends when all dominoes that could match its endpoint have already been played. As a result, trains can become quite long, especially with an extended domino set. It is acceptable to "bend" the train 90° or 180° to keep the train on the playing surface, as long as it does not interfere with the endpoints of other trains.

All trains begin the game as "private", and only the player who owns the train may play on it. When a player draws a domino and is unable (or chooses not to) play it, they must mark their train as "public" by placing a marker on their train. If a player is deemed to have made a strategic error the highest score of that round is added to theirs.

Players have the option, whether they can play on their own train or not, of playing a domino on any train currently marked "public". When a player with a "public" train adds a domino to it, it becomes "private" again and may not be played on except by the train's owner.

The Mexican Train is an additional train that anyone may play on during their turn. They can start the train (by playing a domino matching the engine) or add to the train. However, there is only one Mexican Train. It is sometimes marked (usually with a black marker), or left unmarked (it is generally easy to identify, because it is the only train not facing a player).

When a double is played, it is placed perpendicular to the train. Subsequently adding a domino to the double is called "finishing" or "satisfying the double".

The player who played the double must take another turn. This additional turn follows exactly the same rules as any normal turn. They may play anywhere they like, and do not have to "finish the double" on this turn. They may play elsewhere and, provided they make a legal play, do not have to mark their train for not finishing the double (unless the double was played on their own train). Like any other turn, if they cannot (or choose not to) go, they must draw a domino and mark their train as "public".

If a double remains unfinished after it has been played, the train becomes a "public" train. No other train can be added to by any player until someone "finishes the double". Play passes to the next player who can legally play on this train (if the train is theirs, or if they can legally play on "public" trains). If they cannot "finish the double", they must draw a domino, and if they cannot play it on the double, their own train becomes "public". Play continues like this until someone "finishes the double".

Branching on doubles as in Chicken Foot is not allowed.

With four, six or eight players, the game can be played in teams of two, with partners sitting opposite each other. Rules are identical except that a player's train and his partner's train are considered one and the same (they will usually extend from opposite sides of the station), and thus a player can play on his own end or his partner's, and neither end becomes public until neither partner can play a tile. Scoring is also handled in pairs, with the player who went out scoring zero for his team (even though his partner will have dominoes remaining) and other teams summing their scores for a team score.

Fast Game variation: After the starting double has been placed, turns are ignored, and each player focuses on making their own train as long as possible. Once everyone has made as long of a train as they can, play reverts to turns, using the rules listed above. This speeds up the game, but eliminates some of the strategies of playing doubles.

Delayed First Turn variation: Similar to the Fast Game variation listed above, instead of simultaneously, each person takes turns playing as many dominoes on their train as possible. Any player that is unable to play on their first turn draws a domino, and may then begin their first turn or pass. When a player who has passed finally starts their train, they may play as many dominoes as they can string together. After starting their train, players are only permitted to play one domino at a time as usual, unless playing a double. This version allows a player to save their "first turn" string of dominoes for when they have a chance, instead of being stuck with all dominoes from the beginning.

Branching Doubles variation: Once a double has been satisfied, players may continue to branch off of the double in two more directions, meaning the double will have a matching endpoint on all four sides. Often, players like to angle these branches at a 45-degree angle to accommodate for more room. This variant gives players more choice and speeds up the game.

Swan Drive variation: A player who can play on their own train may also play one tile on each subsequent public train in clockwise order. Each public train must be played on in order to continue in this manner, and only one tile per train may be played (unless a double must be finished). Once a player cannot play on the next public train, or has looped around to their own train, their turn ends. While playing on each public train, the player may choose to play on the Mexican train or skip it when he comes to it, making the placement of the train somewhat strategical. This version makes for a much faster game.