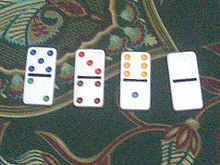 The dominoes used as "matadors." Note that each tile, except the 0-0, has seven pips. 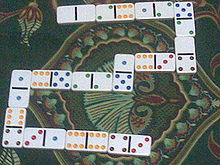 The game of Matador in progress. Note the "matadors": 4-3 is placed beside 6-6, 5-2 against 0-4, and 0-0 against 2-6. Also notice the doubles placed parallel rather than perpendicular to the domino line.

Matador (Spanish, "killer," can also apply to a bullfighter) is a common game using a set of dominoes. While it is similar to many domino games which the object of the game the first to go out, it has a differing very unusual rule of combining pips instead of matching numbers. The game is played using a set of double-six dominoes because of its rules; with larger sets, one can slightly tweak the rules.

After it is decided who goes first, usually the player who picks the highest double (a domino with both ends showing the same number of spots), each play gets five dominoes, with the leftover dominoes set aside in an area known as the "boneyard."

During play, players must connect either end of the domino line not with a matching number on either end, but one causing the two connecting ends to have a total of seven pips, i. e. a six-spot end must be connected with a one-spot one, a four-spot with a three-spot, and a two-spot with a five-spot. Doubles are placed endwise and count the same as single dominoes. Blanks are closed to play of any domino other than a "matador." A "matador" can be either the double-blank domino or one containing a total of seven pips (4-3, 5-2, and 6-1). A player can also place a "matador" at any time without any regard to the numbers at either end of the domino line.

When a player does not have a domino that connects with either end of the domino line, the player must pick a domino from the "boneyard" and see if this is playable. If it is, the domino must be played; otherwise one must pick another domino repeatedly until a playable one turns up. If the "boneyard" is empty, i.e. all dominoes have been taken, the player must signify that he passes his turn, usually by knocking. There is also a rule set that says that when a player has no playable domino and picks up an unplayable domino from the "boneyard," the player must pass immediately.

As usual, the player who has laid all of his dominoes to the domino line wins the game. If all players pass their turn once in succession, the game ends and the player with the lowest number of pips on his leftover dominoes wins.