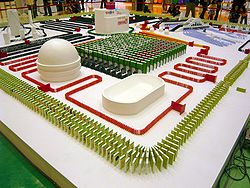 A Domino show is created by setting up dominoes in a long line, to create a chain reaction also called the domino effect. Only the first domino should be toppled by hand. People all over the world try to set up incredible domino projects. One of the elements of excitement of a domino show comes from the risky nature. Everybody understands that every new set up domino is another new risk to lose all of the work they have just completed.

Other tricks include three-dimensional stackings; shapes such as spirals and letters; contraptions like stairs and mouse traps; and dozens of special toppling techniques such as "Sonimod" (the name stands for dominos spelled backwards, also called "Lightspeed setting") that are used for special effects.

The first public domino shows were those of Bob Speca, Jr. from Broomall, PA. In 1976, at the age of 18, he established the first official world record for the highest number of dominos toppled in a chain reaction, by setting up and toppling down 11,111 pieces. That event, and his appearance on The Tonight Show triggered a domino-toppling craze, leading to a long lasting competition among domino-builders about the world record. In 1984, Klaus Friedrich from Germany was the last person to set up a new domino-toppling world record single-handedly. In that same year student film makers Sheri Herman and Bonnie Cutler from Temple University produced and directed a film entitled AND THEY ALL FALL DOWN, showcasing Bob Speca's talents. The film is part of the permanent collection of the Berlin Film Museum.

Two years later, the Netherlands hosted a huge domino toppling exhibition that was later called Domino Day, for the first time. Since 1998, it takes place (almost) every year around November. Their current world record was set at 4,345,027 dominoes, on November 14, 2008.

The biggest professional domino show company in the world is Weijers Domino Productions which was later renamed Weijers DominoDomain.com, the creators of Domino Day. Beside domino builders they employ professional designers, developers and engineers. Their domino shows are used for product introductions, campaign launches, commercial advertisements and team building events. They also invented the so-called Builder's Challenge (BC). It is included in many shows now as an additional attraction (and risk). During the falldown of the dominoes, a builder - or several ones - has to fill in a gap in a line. A certain project (or, rarely, the whole chain) depends on that line, meaning that if the builder fails to complete the challenge in time, the project will not be triggered. BC's have become a very popular discipline among domino-builders.

Due to the popularity of Domino Day, domino-toppling has become a widespread hobby, especially in the USA, Germany, the Netherlands and Asia. There are countless local domino shows held every year, many of them in schools. Domino is popular on YouTube. A anonymous Canadian who calls himself FlippyCat has reached more than 200,000 subscribers with his domino videos on YouTube. Another domino builder, who calls herself Hevesh5 has reached more than 500,000 subscribers with her domino videos. Some other notable builders are Mike and Steve Perrucci, whose previous shows include three events at the Brattleboro Museum and Art Center; Max Poser from Berlin, former world record holder in two disciplines (most dominoes toppled in a spiral, most dominoes stacked on single piece); the Cologne Domino Team (CDT), an association of some of Germany's domino builders that holds an event every summer and the German domino group 'Sinners Domino Entertainment' which is current world record holder in six disciplines and which toppled half a million dominoes in August 2014. It was the largest domino toppling event ever hosted by a private domino group.