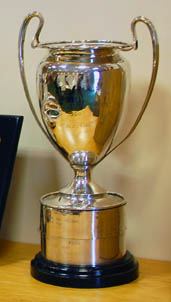 The Camrose Trophy or "The Camrose" is an annual bridge competition among open teams representing the home nations of Great Britain and Ireland: England (EBU), Northern Ireland (NIBU), Republic of Ireland (CBAI), Scotland (SBU) and Wales (WBU). As such it is the open teams-of-four component of the "Home Internationals" organised by Bridge Great Britain.

Lord Camrose, owner of The Daily Telegraph, donated the trophy in 1936 and it was first contested in 1937. The original trophy has been lost and replaced. Because of World War II the series was interrupted mid-way in 1939 and not resumed until 1946, yet the Camrose is the world's most-played international bridge series.

Since 2007 there have been six rather than five teams in the competition, to avoid having one team sit out each round. From 2007 to 2009 the sixth team was the defending champion, so there were two teams from the previous year's winning nation. England's second team won in 2009, when it was the final-round host by coincidence. Since then by design the sixth team is a second team from the final-round host nation, which follows a five-year cycle from Northern Ireland in 2010 to England in 2014. That second representative is named for the national bridge federation; thus "Wales" and "Welsh Bridge Union" both entered in 2011.

Since 2005 a double round-robin is scheduled on two weekends. With six teams, each weekend comprises five rounds of three head-to-head matches, a single round-robin. A match is now 32 deals scored at IMPs and converted to victory points (VP). So every team plays 320 deals in the entire event, 64 against each of its rivals. Before 2005, the teams played head-to-head matches over five weekends.

Before 2007 there were simply five national teams, or four during the 48-year absence by the Republic of Ireland from 1951 to 1998.

England won both of the completed pre-war and the first 17 post-war contests, through 1962. Only England and Scotland were winners in the 56 renditions before year 2000, including England-Scotland ties 1972 and 1973. Ireland first won in 2000 and won four straight beginning 2005. Wales won its first Camrose in 2011, but now England are again dominant, winning five times in the last seven years. The 2015 contest was won by Ireland.

The competition has been completed 72 times up to 2015. There was an outright winner on each occasion except for 1972 and 1973, when England and Scotland tied for first place. England's count includes a win in 2009 by its second team, "English Bridge Union".

Three times recently (*), the winners have been one of two entries from their countries, namely "Ireland" 2008, "EBU" 2009 (English Bridge Union), and "Wales" 2011. They were the defending champion team, the England "B" team, and the Wales "A" team respectively. Their compatriots were "Hosts Ireland", "England", and "WBU" (Welsh Bridge Union).

The 1939 contest was not completed and the next six did not take place because of World War II.

Teams competition in bridge requires a minimum of four players on each team; up to two additional players may be added as alternates. Two tables are in play at the same time with the North-South pair at one table and East-West pair at the other table being teammates.

Camrose matches comprise two sets of 16 deals with player substitutions permitted between sets. Since 2007 the annual event comprises ten matches for each national team; previously there were eight or six matches. All 2011 participants played in 80 to 144 of 160 deals on the second weekend, or five to nine of ten sets (five matches), led by Rex Anderson and David Greenwood who played nine sets for Northern Ireland. Anderson is the career leader with 92 matches played (through 2011).