Snakes and Ladders is an ancient Indian board game regarded today as a worldwide classic. It is played between two or more players on a gameboard having numbered, gridded squares. A number of "ladders" and "snakes" are pictured on the board, each connecting two specific board squares. The object of the game is to navigate one's game piece, according to die rolls, from the start (bottom square) to the finish (top square), helped or hindered by ladders and snakes respectively.

The game is a simple race contest based on sheer luck, and is popular with young children. The historic version had root in morality lessons, where a player's progression up the board represented a life journey complicated by virtues (ladders) and vices (snakes). A commercial version without morality lessons and published by Milton Bradley is named Chutes and Ladders.

The size of the grid (most commonly 8x8, 10x10, or 12x12) varies from board to board, as does the exact arrangement of the snakes and ladders, with both factors affecting the duration of play. Each player is represented by a distinctly coloured game piece token. A single die is rolled to determine random movement of a player's token in the traditional form of play.

Snakes and Ladders originated in India as part of a family of dice board games, that included Gyan chauper and pachisi (present-day Ludo and Parcheesi). The game made its way to England and was sold as "Snakes and Ladders", then the basic concept was introduced in the United States as Chutes and Ladders (an "improved new version of England's famous indoor sport") by game pioneer Milton Bradley in 1943. 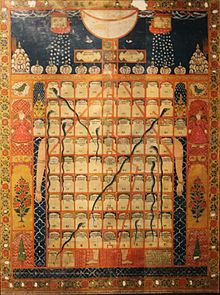 Gyan chauper/Jnan chauper (game of wisdom), the version associated with the Jain philosophy encompassed the concepts like karma and Moksha.

The game was popular in ancient India by the name Moksha Patam. It was also associated with traditional Hindu philosophy contrasting karma and kama, or destiny and desire. It emphasized destiny, as opposed to games such as pachisi, which focused on life as a mixture of skill (free will) and luck. The underlying ideals of the game inspired a version introduced in Victorian England in 1892. The game has also been interpreted and used as a tool for teaching the effects of good deeds versus bad. The board was covered with symbolic images, the top featuring gods, angels, and majestic beings, while the rest of the board was covered with pictures of animals, flowers and people. The ladders represented virtues such as generosity, faith, and humility, while the snakes represented vices such as lust, anger, murder, and theft. The morality lesson of the game was that a person can attain salvation (Moksha) through doing good, whereas by doing evil one will inherit rebirth to lower forms of life. The number of ladders was less than the number of snakes as a reminder that a path of good is much more difficult to tread than a path of sins. Presumably, reaching the last square (number 100) represented the attainment of Moksha (spiritual liberation).

When the game was brought to England, the Indian virtues and vices were replaced by English ones in hopes of better reflecting Victorian doctrines of morality. Squares of Fulfillment, Grace and Success were accessible by ladders of Thrift, Penitence and Industry and snakes of Indulgence, Disobedience and Indolence caused one to end up in Illness, Disgrace and Poverty. While the Indian version of the game had snakes outnumbering ladders, the English counterpart was more forgiving as it contained each in the same amount. This concept of equality signifies the cultural ideal that for every sin one commits, there exists another chance at redemption.

The association of Britain’s Snakes and Ladders with India and gyan chauper began with the returning of colonial families from one of Britain’s most important imperial possessions, India. The décor and art of the early English boards of the 20th century reflect this relationship. By the 1940s, very few pictorial references to the Indian culture were found due to the economic demands of the war and the collapse of British rule in India. Although the game’s sense of morality has lasted through the game’s generations, the physical allusions to religious and philosophical thought in the game as presented in Indian models appear to have all but faded. There has even been evidence of a possible Buddhist version of the game existing in India during the Pala-Sena time period.

In Andhra Pradesh, this game is popularly called Vaikunthapali or Paramapada Sopana Patam (the ladder to salvation) in Telugu. In Hindi, this game is called Saanp aur Seedhi, Saanp Seedhi and Mokshapat. 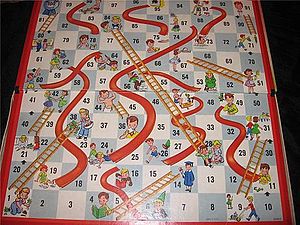 Each player starts with a token on the starting square (usually the "1" grid square in the bottom left corner, or simply, off the board next to the "1" grid square) and takes turns to roll a single die to move the token by the number of squares indicated by the die roll. Tokens follow a fixed route marked on the gameboard which usually follows a boustrophedon (ox-plow) track from the bottom to the top of the playing area, passing once through every square. If, on completion of a move, a player's token lands on the lower-numbered end of a "ladder", the player must move the token up to the ladder's higher-numbered square. If the player lands on the higher-numbered square of a "snake" (or chute), the token must move down to the snake's lower-numbered square.

If a player rolls a 6, the player may, after moving, immediately take another turn; otherwise play passes to the next player in turn. The player who is first to bring their token to the last square of the track is the winner.

A variation exists where a player must roll the exact number to reach the final square to win. Depending on the particular variation, if the roll of the die is too large the token either remains in place or goes off the final square and back again. For example, if a player requiring a 3 to win rolls a 5, they would move forward three spaces and then back two again. In certain circumstances (such as a person requiring a 1 to win rolling a 6), a player can end up further from the final square after this move than before it.

The most widely known edition of Snakes and Ladders in the United States is Chutes and Ladders released by Milton Bradley in 1943. The playground setting replaced the snakes, which were received negatively by children at the time. It is played on a 10x10 board, and players advance their pieces according to a spinner rather than a die. The theme of the board design is playground equipment, showing children climbing ladders and descending chutes. The artwork on the board teaches a morality lesson, the squares on the bottom of the ladders show a child doing a good or sensible deed and at the top of the ladder there is an image of the child enjoying the reward. At the top of the chutes, there are pictures of children engaging in mischievous or foolish behaviour and the images on the bottom show the child suffering the consequences. Black children were depicted in the Milton Bradley game for the first time in 1974. There have been many pop culture versions of the game, with graphics featuring such children's television characters as Dora the Explorer and Sesame Street. It has been marketed as "The Classic Up and Down Game for Preschoolers". There is also a Chutes and Ladders PC Game made by Hasbro designed for Windows 7 or older. You are able to customize your own kid (race, color, gender) before you play the game. You can also play this game alone unlike the board game. The good deeds and consequences come to life in short movies if you land on the bottom of a ladder or the top of a chute on your turn. There are three boards in this version of the classic board game instead of one. Classic, zoo, and circus. There are also mini games in the zoo and circus boards that rely on counting, matching, etc.

The most common in the United Kingdom is Spear's Games' edition of Snakes and Ladders, played on a 10x10 board where a single die is used. Another early British version of the game depicts the path of a young boy and girl making their way through a cartoon railroad and train system.

During the early 1990s in South Africa, Chutes and Ladders games made from cardboard were distributed on the back of egg boxes as part of a promotion.

Even though the concept of major virtues against vices and related Eastern spiritualism is not much emphasized in modern incarnations of the game, the central mechanism of Snakes and Ladders makes it an effective tool for teaching young children about various subjects. In two separate Indonesian schools, the implementation of the game as media in English lessons of fifth graders not only improved the students' vocabulary but also stimulated their interest and excitement about the learning process. Researchers from Carnegie Mellon University found that pre-schoolers from low income backgrounds who played an hour of numerical board games like Snakes and Ladders matched the performance of their middle-class counterparts by showing improvements in counting and recognizing number shapes. An eco-inspired version of the game was also used to teach students and teachers about climate change and environmental sustainability.

Mathematics of the game 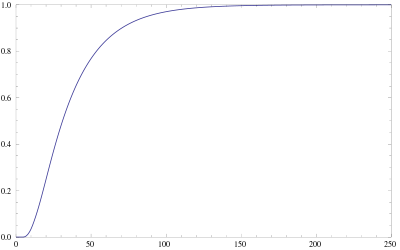 Any version of Snakes and Ladders can be represented exactly as an absorbing Markov chain, since from any square the odds of moving to any other square are fixed and independent of any previous game history. The Milton Bradley version of Chutes and Ladders has 100 squares, with 19 chutes and ladders. A player will need an average of 39.6 spins to move from the starting point, which is off the board, to square 100. A two-player game is expected to end in 47.76 moves with a 50.9% chance of winning for the first player.

In the book Winning Ways the authors show how to treat Snakes and Ladders as an impartial game in combinatorial game theory even though it is very far from a natural fit to this category. To this end they make a few rule changes such as allowing players to move any counter any number of spaces, and declaring the winner as the player who gets the last counter home. Unlike the original game, this version, which they call Adders-and-Ladders, involves skill.

The game is a central metaphor of Salman Rushdie's Midnight's Children. The narrator describes the game as follows:

All games have morals; and the game of Snakes and Ladders captures, as no other activity can hope to do, the eternal truth that for every ladder you hope to climb, a snake is waiting just around the corner, and for every snake a ladder will compensate. But it's more than that; no mere carrot-and-stick affair; because implicit in the game is unchanging twoness of things, the duality of up against down, good against evil; the solid rationality of ladders balances the occult sinuosities of the serpent; in the opposition of staircase and cobra we can see, metaphorically, all conceivable oppositions, Alpha against Omega, father against mother.