Chinese poker is a type of card game.

Chinese poker is typically played as a four-person game, though it can also be played with two or three. 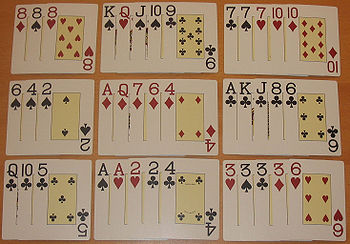 In Chinese Poker, each player receives a 13-card hand from a standard 52-card deck. Each player then has to divide their cards into three poker hands (known as "setting"): two containing five cards each (known as "the middle" and "the back"), and one containing three cards ("the front"); the back must be the highest-ranking hand, and the front, the lowest-ranking hand (note that straights and flushes do not count in the three-card hand). The back hand is placed face down on the table in front of the player, then the middle hand is placed face down in front of the back hand, and the front hand is placed face down in front of the middle hand. After all the players have set their hands, each player will announce in turn (clockwise, starting from the left of the dealer) whether or not they are playing their hand. All players then announce their royalties, before revealing their hands.

If a player makes three flushes or three straights they automatically win the hand, regardless of the other players' hands. As shown in the photo, the middle player has made all three hands flush and is an automatic winner.

The stakes played for in Chinese poker are known as units: an amount of money agreed on before the game starts. Basic scoring rules dictate that a player collects one unit from each opponent whose front, middle or back hand is beaten by their own corresponding hand. Thus, unlike most poker games, being second-best at the table is good enough to win money. In some variants players are also paid an additional unit if they win in two or three of the hands. In other variants players only get an additional unit if they win all three hands (known as a scoop). Also, due to the head-to-head nature of the comparisons, it is possible for different players to play for different stakes. For example, A and B could play for $10 per unit versus each other, while all other player pairings play for $1 per unit. Many variations of scoring are in common use; refer to the external links for more information.

In the 2-4 method the player receives 1 unit for each of the three hands they win, and 1 unit called the overall unit is awarded to the player who wins two out of the three hands, or all of the three hands. In the event of a tie in one of the hands, no money is exchanged for this particular hand. If one player wins both of the other two hands, they collect 3 units (1 for each hand, and 1 overall). If they each win one hand, no units are exchanged (each win 1 unit, and there is no overall).

Royalties, or bonuses as they are sometimes called, are extra units that may be awarded to players with particularly strong hands.

Royalties must be declared prior to the revealing of the hands.

Some hands and combinations of hands that are commonly awarded royalties are listed:

Naturals are special types of royalties where if dealt to a player, the player is rewarded immediately (prior to anyone surrendering), and the player does not set their hand:

In some variants all royalties are worth the same amount (e.g., 1 unit per royalty). In other variants each royalty is given a different payout (e.g., 1 unit for a four of a kind in the back, and 2 units for a straight flush in the back). Normally only the winner may be awarded a royalty (e.g., four sevens in the back beats four sixes in the back; therefore, only the player with sevens is awarded a royalty). Some modified rule sets allow the royalty bonus to cancel out and only the point for the hand/row is added. In some games players are allowed to break up straight flushes or four of a kinds and still receive royalties (e.g., a player is dealt four sevens; they may use three of them for a three of a kind in the front, and one as part of a straight in the middle). Some rules say that players are only allowed to claim one royalty per hand. The standard royalties point structure is listed below.

If a player mis-sets their hand (e.g., they put three of a kind in the front, but only two pair in the middle) then they must pay each of their opponents still in the hand (players who have not surrendered) an amount equal to being scooped. In some variations players are still required to play their hands.

The Venetian, Bellagio and Wynn casinos in Las Vegas, Nevada have been known to spread Chinese poker at their poker tables.

In this variation the players are dealt five cards in the beginning. These cards are arranged faceup on the table to the back, middle, and front hands. The cards cannot be rearranged later. Then the players receive a single card at a time for the rest 8 cards. This means it is possible to make an illegal hand. This variation originates from Finland. Interesting is that Open Face Chinese Poker first was named Russian Poker. But because of the same Casino Game the game was renamed. This game become popular everyday and now it is also available online.