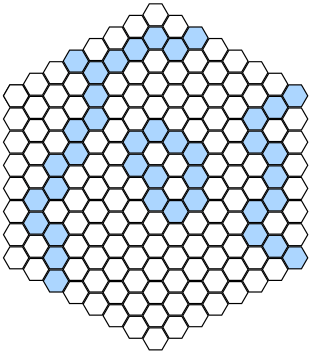 Havannah example winning structures, on a base-8 size board good for beginners

Havannah is an abstract strategy board game invented by Christian Freeling. It is best played on a base-10 hexagonal board, ten hexes (cells) to a side. Havannah belongs to the family of games commonly called connection games; its relatives include Hex and TwixT.

The game was published for a period in Germany by Ravensburger (the Ravensburger edition, however, had a smaller, base-8 board). It is nowadays only produced by Hexboards.

One player plays as Black; the other plays as White. White starts, after which moves alternate. The rules are as follows:

Players of different strength can still play an interesting game when the weaker player (as White) is allowed to place two or more stones on the first turn.

While draws are technically possible, in practice they are extremely rare. There has been one known draw between human players. Tactics are much easier to master than strategy, and differences in playing level are considerable.

In 2002 Freeling offered a prize of 1000 euros, available through 2012, for any computer program that could beat him in even one game of a ten-game match. For many years, computer programs lagged far behind human players. However, since 2010 several Havannah-playing programs have applied Monte-Carlo Tree Search techniques resulting in some notable improvement in playing strength. The "Havannah Challenge 2012" was held October 15-19, 2012 during which Freeling played ten games against three of the strongest Havannah-playing programs available, playing (at least) one game as Black and one as White against each opponent. Freeling lost the challenge when he had to resign a game with white against the Lajkonik program.