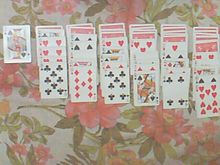 The initial layout of the game of Yukon. 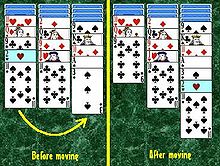 The legal move in Yukon: any face up card is available for play (as indicated by the darkened card) and is moved along with the cards on top of it.

Yukon is a version of solitaire similar to standard Klondike solitaire, but with the following additions: