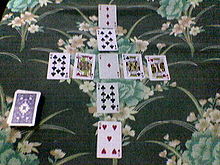 The layout of the solitaire game Windmill at the start of the game.

Windmill is a solitaire card game played with two decks of playing cards. It is so called because the initial layout resembles a windmill's sails. 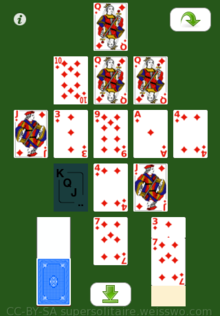 The illustration below shows how the tableau is initially laid out. (A) is for the primary foundation, R for the reserve (8 free cells) and (K) for the secondary foundations, empty at first.

There is also an alternate variation wherein the direction of building in the primary and secondary directions are reversed. In this variation, the primary foundation starts with a laid-out king and is built down while the secondary foundations should start with aces and are built up.