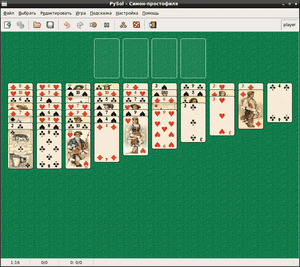 Simple Simon is a Patience game played with a regular 52 cards deck (4 suits of 13 cards each without Jokers). It became somewhat popular being featured in some computerized collections of Solitaire card games, but its origins possibly predate its implementation as a computerized game.

At the beginning of the play the cards are dealt all facing the player, starting from 3 columns of 8 cards each, and then 7 columns with 7, 6, and so forth cards until 1.

A card can be placed on any card on the top of a column whose rank is greater than it by one (with no cards that can be placed above an Ace). A sequence of cards, decrementing in rank and of the same suit, can be moved as one. An empty column can be filled by any card. A sequence of cards from the king down to the Ace - all of the same suit - can be moved to the foundations. The object of the game is to place all four suits in the foundations.

Freecell Solver, an automated solver for various Card Solitaire games, was adapted to solve Simple Simon, by its primary developer, Shlomi Fish, back in September, 2001. Fish initially tried implementing the solver using individual Simple Simon moves, but that ended up causing the program to check many states without a visible end. So instead, he opted for a scheme in which every sequence of moves conducted by the solver ended up in either clearing a column, moving a card on top of a card of the same suit, or (more rarely) moving a column to the foundations. Implementing this strategy turned out to be sufficient for solving many games, and so it was kept.

Stephan Kulow has commented that this is "what makes the game a joy: either it's impossible to solve and you see it in the first moves or it's solvable and you only have to find the best route."

A programmer called Michael Mann added another type of move to Freecell Solver which placed cards above a parent of a different suit. This reportedly increased the percentage of games that were solvable by the solver to well over 90%. This change was not incorporated into the mainline Freecell Solver, because it increases the necessary time and iterations to solve many games considerably.

On 30 May 2009 a more up-to-date version of Freecell Solver (with more bug-fixes and other modifications) was used to collect statistics on the first 5,000 PySol Simple Simon boards. Its results were that 3,702 of the 5,000 games (or 74%) were shown to be solvable by the solver, while 2,787 out of them were solved with 100 solver iterations or less. Of the boards that the solver could not solve, it gave up after 100 iterations or less at roughly 89.50% of them. The solutions that were generated by the solver for the solvable boards were validated as correct by Games-Solitaire-Verify, a CPAN distribution written in Perl 5 for such tasks.

On 9 July 2009 Fish updated the solver to contain Michael Mann's additional move again and re-run Freecell Solver on the first 5,000 PySol Simple Simon games. This time the results were that the solver was able to solve 4,533 (or 90%) of the deals, and generally reached a conclusion within 100 moves. The solutions to the solved deals were also verified to be correct using Games-Solitaire-Verify. Freecell Solver's Simple Simon-solving method is not exhaustive and may result in false negatives. As a result, it is possible that a larger percentage of the games are solvable.