King Albert is a solitaire card game using a deck of 52 playing cards. It is said to be named after Albert I of Belgium. It is the best known of the three games that are each called Idiot's Delight because of the low chance of winning the game (the other two are Aces Up and Perpetual Motion).

The aim of the game, like many solitaire games, is to release the aces to the foundations and build each of them up by suit to Kings.

First, the cards are dealt into nine columns in such a way that the first column contains nine cards, the second having eight cards, the third seven, and so on until the ninth column has a single card. The seven left over cards form the reserve, sometimes known as "the Belgian Reserve." 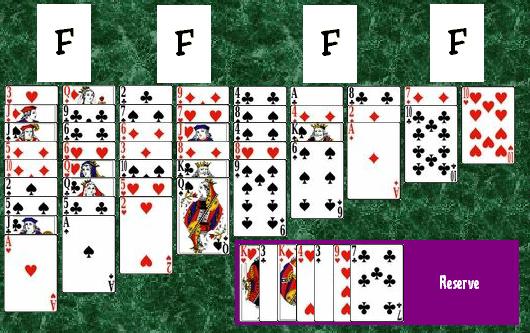 Building on the tableau is down by alternating colors and only one card can be moved at a time. Only the top card of each column and all cards in the reserve are available for play as well as the top cards in the foundation. Furthermore, an empty column can be filled with any available card.

Once an ace is released, it can be built upon immediately.

The game is won when all cards end up in the foundations. Achieving this is difficult as only one in ten games can be won, hence the alternate name of Idiot's Delight.