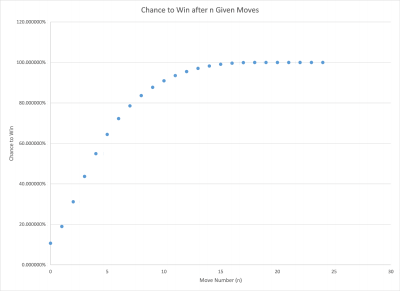 Chance to Win after n Given Moves

Elevens is a solitaire card game using a standard 52-card deck. Cards are placed in a 3x3 grid, and pairs of cards which add up to eleven (5 and 6; 4 and 7; 3 and 8; 2 and 9; Ace and 10) are covered up; face cards (J, Q, K) may be eliminated in a set of three cards consisting of one Jack, one Queen and one King regardless of suit. If all cards are covered up the game is won; if there are no more pairs of cards that add up to eleven, and there do not exist a Jack, a Queen, and a King, the game is lost. An individual game of elevens is a game of pure chance, except for the small element of skill involved in spotting the pairs; the skill and strategic interest comes in not shuffling the cards at the end of each game, but instead collecting them up in order. 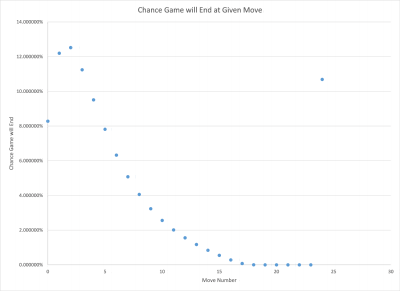 Chance Game will End at Given Move

In the side of the page, there are graphs displaying odds of winning and ending the game at specific points. These statistics were made using one billion simulations of randomly shuffled decks. The more important points are: