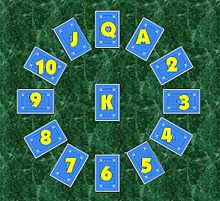 Clock Patience, also known as Clock Solitaire is a solitaire card game with the cards laid out to represent the face of a clock.

The twelve positions around the circle represent the 12-hour clock and the pile in the middle represents the hands.

This is a game of zero skill and is a purely mechanical process. The chances of winning are 1 in 13. There is no possible way to win the game if none of the bottommost cards in the twelve circle piles at the start of play is a king.

There is also a variation of Clock Patience, commonly known as Watch. It is played like Clock Patience except when the fourth king appears, the player can continue the play by replacing the king with a still faced-down card. Game ends when that fourth King reappears.

The Clock is a variation from a German solitaire book that describes a completely different rule for this game that depends more on the skill not to miss cards to be played to the foundations. The original is called "Die Uhr" and is a stock and waste type of solitaire. The rule for The Clock is from a book by Rudolf Heinrich 18th edition that dates back to 1976.