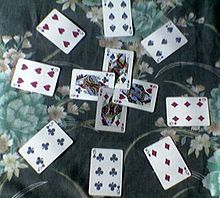 A game of Captive Queens at its earlier stages, if the fives, sixes, and queens are dealt first.

Captive Queens is a solitaire card game using a deck of 52 playing cards. The game is so named because the queens become "enclosed" as the foundations are built.

There are two ways that the queens are played in this game: either they are laid in the center of the table immediately or shuffled into the deck and laid out later. Either way, their role is purely decorative and play no functional role in the game.

The game starts by laying cards from the stock one at a time into a wastepile in search for fives or sixes. Once any of these cards are found, it becomes a foundation and can be placed on a circle surrounding the area where queens are placed; it can be built upon immediately. The foundations' places in this circle are irrelevant.

The fives then receive cards lower than five while the sixes receive higher cards, all by suit. Here's the chart of which cards are placed on these cards:

After the foundation cards are found, the rest of the stock is dealt to look for cards that can be built on the foundations. In case the queens are shuffled into the deck, when a queen is found, it is placed on the center.

Once the stock runs out, the cards are gathered from the wastepile and become the new stock from which cards are to be dealt. This can only be done twice in each game. 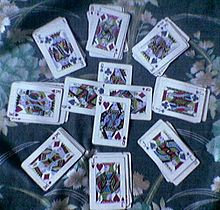 The ideal (and usual) end of a game of Captive Queens.

The game is won when all the cards are in the foundations with the face cards (kings and jacks) at the top of each foundation, like the thumbnail at the right.