Beleaguered Castle is a solitaire card game played with a deck of 52 playing cards. It is one of the card games touted as "Freecell without cells" because its game play is somewhat akin to the popular solitaire computer game but without extra empty spaces to maneuver. This game is also called Laying Siege and Sham Battle.

First, the player removes the aces from the deck and aligns them vertically without overlapping them. They form the foundations. Then cards are dealt to the left and right of the aces, forming eight rows of six overlapping cards each. 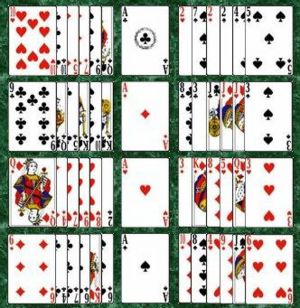 The initial layout in Beleaguered Castle

The top card of each row (the cards that are exposed) is available for play either on the foundations or on any other row. The foundations are built up to kings by suit. Cards in the rows are built down in sequence regardless of suit. Once a row becomes empty, it can be filled by any card.

The game is won when all of the cards are built onto the foundations. However, this is easier said than done because most games are doomed to fail in just a few moves.

In the 2011 film Source Code, "Beleaguered Castle" is the call sign for the Source Code program.