All in a Row - Solitaire 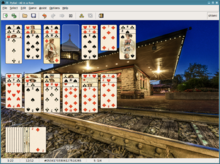 All in a Row is a solitaire card game that is akin to Golf and Tri Peaks, and is very similar to Black Hole. The game's objective is to put the entire deck into the foundation.

The cards are dealt to the tableau in columns of four. The foundation (the "row") can be started from any column, and afterwards it is built with cards incremented or decremented from the previous card by one (where kings and aces wrap).

Only the top cards of each pile in the tableau are available for play.

The Black Hole Solitaire solver by Shlomi Fish was adapted to solve All in a Row deals, and was subsequently run on the first 1 million PySolFC deals. The solver found that 670,676 out of the million deals were solvable, while the other 329,324 were provably impossible, yielding a winning rate of over two thirds (67%).