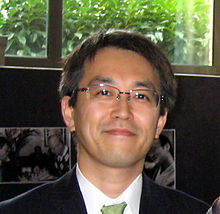 Yoshiharu Habu was born in Tokorozawa, Saitama in 1970 and moved to Hachioji, Tokyo before entering kindergarten. Habu first encountered shogi in his first year of elementary school, when his classmates taught him how the shogi pieces move. He was so fascinated by the game that his mother entered him in a shogi tournament held at the Hachioji Shogi Club in the summer of in 1978. Although Habu was eliminated during the preliminary rounds with a record of 1 win and 2 losses, his parents took him to the shogi club every weekend from October 1978. Habu improved so rapidly that he was promoted to amateur 5-dan in October 1981 at the age of 11.

During his elementary school days, Habu regularly participated in regional and national shogi tournaments, mainly for children. At these tournaments, Habu played against several children of the same age who would also become professional players, including Toshiyuki Moriuchi, Yasumitsu Sato and Manabu Senzaki. Those players born around 1970 are now known as the "Habu generation", not just because they were born in the same year, but also due to their outstanding achievements as players.

In July 1981, Habu qualified to participate in the Amateur Meijin Tournament as the youngest ever representative ever of the Tokyo Suburban Area, and won four tournaments for elementary school children the following August. In April 1982, Habu won the 7th Elementary School Meijin tournament (小学生将棋名人戦 Shōgakusei meijinsen). He expressed his desire to become a professional player and asked advice from Katsuyasu Nakajima, the owner of the Hachioji Shogi Club and a student of Tatsuya Futakami. Habu applied to the Apprentice professional training school (奨励会 shōreikai) as Futakami's student and was accepted as a member later in 1982.

Habu became a 4-dan professional in 1985 at the age of 14. He was the third "junior high school kid professional" in shogi history following Hifumi Kato and Koji Tanigawa. In 1989, at the age of 19, Habu 6-dan won the Ryu-oh championship, defeating Akira Shima who led a 4-person shogi study group "Shimaken" in which Habu himself took part. This was the first time Habu won one of the seven major titles making him, at the time, the youngest titleholder ever. Although he lost the Ryu-oh title to Tanigawa the following year, Habu won the Kioh championship four months later in 1991. Since then he has held at least one of the seven major titles every year since then, and according to custom of the titleholder system he has, therefore, never been referred to by his dan ranking since winning that first championship in 1989.

Accumulating three wins in major championships (Ryu-oh in 1989, Kioh in 1991 and 1992), Habu actually did qualify for promotion to 9-dan in March 1992, but the existing promotion rules required him to be promoted to 8-dan first and then to wait one year before his next promotion. He was officially promoted to 9-dan on April 1, 1994.

In 1992 Habu won the Oza championship defeating Bungo Fukuzaki to hold two titles (Kioh and Oza) simultaneously. He went on to hold the Oza title for 19 terms in a row. In 1996 (February 14 to July 30), Habu became the first professional to ever hold all seven major titles (Ryu-oh, Meijin, Kisei, Oi, Oza, Kioh, and Osho) at the same time, a remarkable feat that has not been duplicated since.

In July 2012, Habu won his 81st shogi title overall when he won in the Kisei title, becoming 1st on the all-time title-winners list, and surpassing the 80 of the late Yasuharu Oyama.

In June 2014, Habu defeated the defending Meijin Toshiyuki Moriuchi four games to none to become the 72nd Meijin. Habu lost his Meijin title to Moriuchi in 2011 (69th Meijin match) and was unable to defeat Moriuchi and regain the title in both 2012 (70th Meijin match) and 2013 (71st Meijin match). By defeating Moriuchi, Habu not only moved into a tie with both Moriuchi and Yoshio Kimura for third place on the all time Meijin winner's list, he also became the first person the recapture the title for the third time.

In March 1996, Habu married actress and singer Rie Hatada at Hato no Mori Hachiman Shrine in Sendagaya, Tokyo not far from the head office of the Japan Shogi Association. The two had met for the first time in September 1994 and officially announced their engagement in July 1995. It was reported that 80 police officers were assigned to the ceremony due to the popularity of the two. As of 2012, they have two daughters. He is also one of the best chess players in Japan, with an Elo rating of 2415 (February 2014).

The promotion history of Habu is as follows:

Titles and other championships

There are 7 major titles in shogi. Below is a list of number of times and years Habu has won each title.

In addition to major titles, Habu has won the following non-title tournaments.

Note: Tournaments marked with an asterisk (*) are no longer held.

Habu's has received the following awards in recognition of his accomplishments throughout his career. The "Annual shogi awards" are awarded by the Japan Shogi Association, or JSA, to its members each year in recognition of performance during official play throughout the previous professional shogi year or shogi"nendo" (年度) (April 1 to March 31). "Other awards" includes those awarded by the JSA for career accomplishments and those awarded governmental organizations, etc. for contributions made to Japanese society.

Habu has written numerous books, articles, etc. on shogi and various other topics. The vast majority of these works are in Japanese, but a few have been written especially for non-Japanese readers. Below is a select list of Habu's works.