Unlike the English and Spanish versions, the French World Championships are made up of various tournaments, somewhat like the World Series of Poker. The "Main Event" is the Elite tournament which has existed since 1972, and was first won by the tournament's creator Hippolyte Wouters.

Some other tournaments are organised during the week which do not crown a World Champion but do have a winner:

History of the Championships

The French World Scrabble Championships started off as a small tournament in Cannes with just 7 players, and at the time, was not considered to be a World Championship. The tournament moved each year and more and more players which led to other tournaments being created at the same venue. The Elite tournament was at first dominated by Belgian players, with 5 of the first 7 championships being won by Belgian players. After three French winners in 1979, 80 and 81 the tournament was taken over by Michel Duguet of France who won the tournament 5 times in 7 years, while finishing second twice in that period. Duguet also set various championship records by dropping just 12 points in 5 games, which is 99.71%. After winning the Elite World Championship for a 5th time he retired from Scrabble and took up contract bridge and became one of the best players in the world, competing in both the French national championships and the European team championships.

After Duguet's retirement the French domination of the championships continued, with in total 12 championships in a row being won by France. Indeed France also took second place every year during that ran, apart from in 1990 when Christian Pierre of Belgium finished second. In 1991 it was Christian Pierre who won Belgium's first title since 1978 and continued to win the title a total of 5 times in 8 years, matching what Duguet did in the 1980s. In 2002 and 2003 Jean Pierre Hellebaut became the first Swiss winner of the tournament. In fact he was born in Belgium and had previously finished second in the Belgian national championship in 1991 but after moving to Switzerland, won the World Championship 2 years in a row, a feat only accomplished before that by Duguet and Pierre. Antonin Michel has since dominated the Elite World Championships, having won the tournament twice in 2005 and 2007 and having finished second in 2001 and 2006.

The pairs event has been mainly dominated by France; Michel Duguet holds the record with five titles while Antonin Michel and Franck Maniquant (also of France) are just behind with 4 titles. Two African players have won the title - Ndongo Samba Sylla and Mactar Sylla of Senegal - these two are in fact brothers.

The blitz is a relatively recent event, added in 2001 and 5 of the 8 championships have been won by Antonin Michel. The four other winners and Florian Lévy and Franck Maniquant of France, and Ndongo Samba Sylla and Mactar Sylla of Senegal.

The match play tournament known as le Championnat du monde de Scrabble classique was brought in in 2006 and has been systematically dominated by African players, showing that the traditional form of Scrabble is more popular in Africa than the duplicate one. In 2008 in Dakar, 7 of the top 10 players were African, the three exceptions being Pascal Astresses, Antonin Michel and Hervé Bohbot all from France.

List of winners of the Elite (duplicate individual) tournament 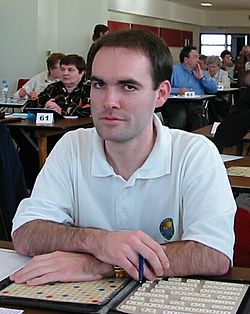